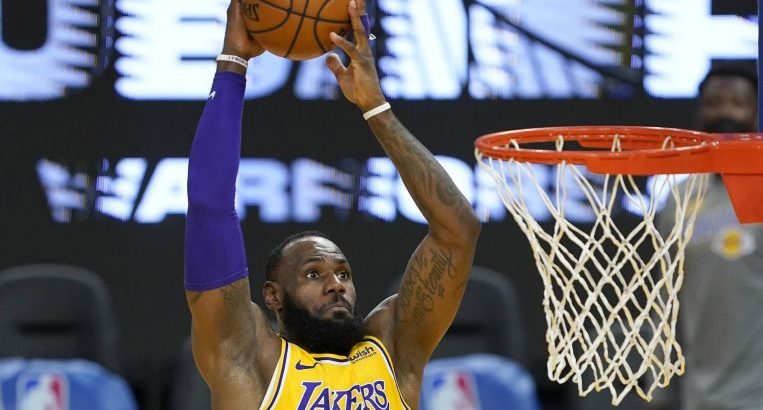 LOS ANGELES (REUTERS) – LeBron James recorded the 98th triple-double of his career and Montrezl Harrell scored 15 of his team-high 27 points in the second quarter on Monday night (March 15), during which the Los Angeles Lakers pulled away from the Golden State Warriors en route to a 128-97 victory in San Francisco.

The win allowed the Lakers to win the season series 2-1 from their Pacific Division rival, which is potentially significant in that the team that won the last six series between the two went on to reach the National Basketball Association (NBA) Finals, claiming four championships.

The game was tied 29-all in the first minute of the second period before Harrell helped the Lakers take command for good.

First, he contributed two hoops and three free throws to a 13-3 burst that allowed the visitors to build their first double-digit lead at 42-32.

Later, he provided the first four points in a 17-8 finish to the quarter that turned a six-point game into a 65-50 half-time advantage.

The Warriors, who were coming off an impressive home win over Utah one day earlier, could get no closer than 12 in the second half.

James’ triple-double, his fourth of the season, consisted of 22 points and game highs of 10 rebounds and 11 assists. He ranks fifth on the NBA’s all-time list for triple-doubles, needing nine to tie Jason Kidd for fourth.

Talen Horton-Tucker (18), Kyle Kuzma (17) and Kentavious Caldwell-Pope (14) also scored in double figures for the Lakers, who return home to face the Minnesota Timberwolves on the second night of a back-to-back on Tuesday.

Stephen Curry scored 27 points to lead the Warriors, who lost for the fifth time in their past six games.

Andrew Wiggins chipped in with 15 points, Jordan Poole 14, Kelly Oubre Jr. 12 and Nico Mannion 10 for Golden State, who were limited to 43 per cent shooting. James Wiseman grabbed a team-high eight rebounds while Draymond Green led the team with seven assists.