Kawhi Leonard scored 28 points, and Paul George added 17 of his 26 points in the first quarter as the Los Angeles Clippers extended their winning streak to six games with a 114-99 victory over the Dallas Mavericks on Tuesday.

George and Leonard were playing together in a road game for the first time, and they were on the court as teammates for just the fourth time overall. 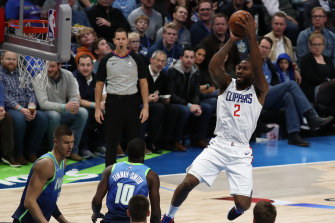 Kawhi Leonard and the Clippers improved to 13-5 with their sixth victory in a row.Credit:Getty Images

Luka Doncic had 22 points and eight rebounds, and Kristaps Porzingis added 15 points and 10 boards for the Mavericks, who saw their five-game winning streak come to an end. Dallas lost a home game for the first time since November 8.

The Clippers' defence, led by guard Patrick Beverley, clamped down on Doncic, who entered averaging 30.6 points per game, third best in the NBA. The Mavericks were also the second-best scoring team in the NBA at 119.1 points per game.

George shot five of nine from the field and four of six from three-point range in the first quarter. The Clippers went seven of 11 (63.6 percent) from beyond the arc in the opening 12 minutes, but hit just 39.3 percent from the field overall during the quarter.

In Denver, Jerami Grant scored a season-high 20 points while Will Barton had 17 points, eight rebounds and eight assists as the Nuggets beat the Washington Wizards 117-104.

Jamal Murray had 16 points, Mason Plumlee scored 15, and Nikola Jokic had a season-high 20 rebounds for the Nuggets, who have also won six in a row.

Jordan McRae led the Wizards with 21 points. Davis Bertans, Bradley Beal and Moritz Wagner had 14 each for the Wizards, who have dropped their past two games.

Washington came into the night tied for second in the NBA in points per game at 119.1, but needed a big fourth quarter to surpass the 100-point mark. The Wizards' season low of 97 points came in the second game of the season and is the only time in 15 games the team has failed to reach 100 points.

The Wizards cancelled their morning shootaround due to the winter storm that hit late Monday night. Up to 16 inches of snow fell in the metro area, but the storm had stopped by mid-afternoon.

The Nuggets led by 17 at halftime and 20 in the third quarter, but Washington was able to cut into the deficit with a couple of three-pointers. Denver responded with a 7-2 run to push the lead back to 19 and closed out the third leading 86-69.