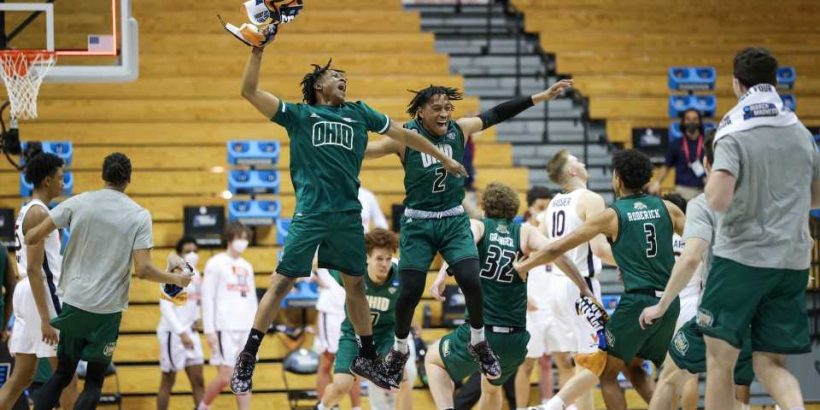 The third time isn’t a charm.

Ohio, a 13 seed, upset defending national champion Virginia 62-58 in the NCAA Tournament on Saturday. It was a record-setting weekend where four teams seeded No. 13 or lower won in the first round in the expanded bracket era (which began in 1985). The Bobcats joined No. 15 Oral Roberts, No. 14 Abilene Christian and No. 13 North Texas in pulling off major upsets.

The Golden Eagles, Wildcats and Mean Green are wonderful Cinderella stories, but Ohio has the best story because it’s part of a trilogy.

The Bobcats are now tied with Richmond for most first-round victories as a No. 13 seed or lower with three apiece. The Spiders were that team with legendary upsets of No. 4 Indiana in 1988 and No. 2 Syracuse in 1991. Richmond pulled off one more against No. 3 South Carolina in 1998.

In the 21st century, however, there hasn’t been a better first-round bracket-buster than the Bobcats. That’s why they were such a popular upset pick against Virginia, although some of that was based on the Cavaliers pulling out of the ACC Tournament because of COVID-19 issues.

Still, you could see this upset coming in the second half when the Bobcats took the lead. Ohio has been there, done that.

No. 4 Michigan found out in 2012 when D.J. Cooper outdueled Trey Burke in a 65-60 victory. Ohio parlayed that into a Sweet 16 run and nearly became the first No. 13 seed to reach the Elite Eight until a 73-65 overtime loss to North Carolina. Both of those runs were under coach John Groce before he took the job at Illinois.

Now No. 4 Virginia knows. Ben Vander Plas hit back-to-back 3-pointers in the second half for a 45-40 lead that the Bobcats would not give back. Star guard Jason Preston nearly had a triple-double with 11 points, 13 rebounds and eight assists. Second-year coach Jeff Boals — who was a forward on Ohio’s 1994 NCAA Tournament team with Gary Trent — guided the Bobcats through a season that was paused twice because of COVID-19. This is a dangerous team that is hot at the right time.

Ohio burned through the Mid-American Conference with victories against Kent State, Toledo and Buffalo, and it showed its high-end potential in a 77-75 loss to Illinois on Nov. 27.

Once again, Ohio is the Cinderella that March Madness can rally around for a couple more days as it heads into a second-round matchup against No. 5 Creighton. Preston continues to attract NBA attention, and Boals is capable of building a MAC program that could make an Elite Eight run like Kent State did as a No. 10 seed in 2002.

The Bobcats are a fun story. Alumni know all the telecast references. Court Street. Red Brick Tavern. Harvard on the Hocking. Athens, Ohio’s favorite native son — Bengals quarterback Joe Burrow — had something to say afterward, too.

Burrow knows. Athens is one of those special places where these first-round March Madness moments mean a little more, and this tournament needs a few of those knowing VCU could not play Saturday because of COVID-19 issues. Oral Roberts, Abilene Christian, North Texas, and, yes, Ohio make this tournament even more appealing in uncertain times.

There is a potential plot twist to this fairytale, too. A victory over Creighton could set up a matchup with No. 1 Gonzaga — a Cinderella-turned-blue-blood that’s pursuing the first undefeated season in men’s Division I since Indiana in 1976.

Imagine the Bulldogs needing a victory against the Bobcats to do it.

That is a March Madness tale we haven’t seen yet.

Nothing sounds more charming than that.