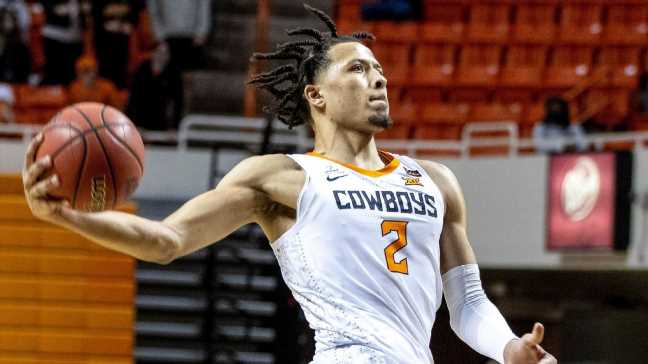 Cade Cunningham announced Thursday that he will enter the 2021 NBA draft after a dynamic freshman season that saw him named a first-team AP All-American.

The 6-foot-8 Oklahoma State point guard is expected to be a high pick — possibly No. 1 overall, as he is ranked as ESPN’s top draft prospect.

His decision was no surprise. He participated in Senior Night activities before the Cowboys faced Oklahoma in Stillwater.

Cunningham, who won the Wayman Tisdale Award as the top freshman in college basketball, led the Big 12 in scoring with 20.1 points per game — the fourth-highest mark by a freshman in league history — while also ranking in the top 10 in rebounding (6.2, ninth), field goal percentage (.438, eighth) and free throw percentage (.846, third).

He often saved his best moments for late-game surges. In his most dynamic performance, he scored 10 of his 40 points in overtime to help the Cowboys win at rival Oklahoma. He finished his college career by scoring 24 points in Oklahoma State’s 80-70 loss to Oregon State in the second round of the NCAA tournament.