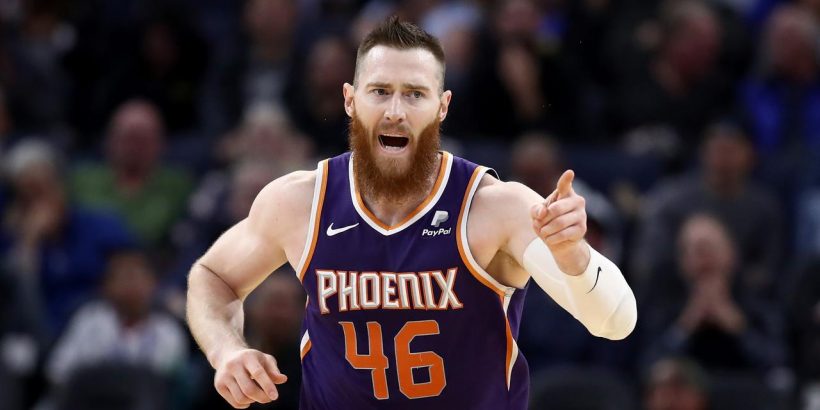 Boomers big man Aron Baynes hasn’t ruled out extending his Olympic career to Paris 2024, but for now he is focused on Australia’s “best chance” to win a maiden medal in Tokyo.

Baynes, 34, is heading into his third Olympics in Japan, and while another Games appearance is possible, he is locked in on the present.

For the Boomers that means an opening Group clash against Nigeria on Sunday from 6.20pm (AEST).

“It is one of those things where you never say never (about Paris 2024), but at the end of the day we know how quickly things can change as well,” Baynes said.

“So, we are 100 per cent focused on this (Tokyo). It is our one goal and aren’t focused on anything other than the next game and doing everything we can to go and get that gold medal.

“We know this is probably the best chance we’ve ever had at going out there to get it, so we are working towards it and doing everything we can to do it.

“We have to go out and give it the best crack right now.”

Baynes believes the Boomers are perfectly placed to succeed under coach Brian Goorjian.

The six-time NBL championship-winning mentor has ingrained his famed defensive steel in the Australian players, as seen in exhibition wins over Argentina, Team USA and Nigeria.

Baynes has enjoyed working under Goorjian, the man he and other senior Boomers players once feared as youngsters coming through the Australian Institute of Sport ranks in Canberra.

“Everyone was intimidated whenever Goorj walked through at the AIS or when we were on the junior teams,” he recalled.

“Everyone knew him, but no one really wanted to say much to him because we were all a bit stand-offish and put on the back foot before he even said anything just from hearing the stories about what the Boomers did in camp and how hard their practices were and how tough he was as a coach.”

Baynes’s perception of Goorjian has shifted again after spending time with him in Boomers camp in the lead-up to the Olympics.

He believes the veteran mentor’s connection with the team’s senior stars like Patty Mills and Joe Ingles, who he introduced to the Olympic stage in Beijing in 2008, will play a vital role in helping the Australians succeed in Tokyo.

“Goorj has always been around the program, and he has always kept an eye on us and has always followed and come to say g’day to us when we are around,” he said.

“After a few conversations and after a few more years of being around him and seeing the way he does things; all those worries have kind of gone out the window and we are just excited to go out there, learn from him and try and impart what we do.

“So, it isn’t going to be too much of a change, and we are just looking forward to getting out there and getting to know Goorj more as a person as well.

“I’m thankful that he could take this role because of his familiarity with all of us.”

The Boomers will be in Tokyo without their families, but Baynes knows the support of the players’ wives and partners will be vital.

He revealed his wife Rachel regularly kept in contact with Ingles’ wife Renae, especially during the ups and downs of a long NBA season.

“We couldn’t do it without them,” he said.

“I know the partners keep up with each other and they are support for each other.

“Renae and Rach talk often, and they lean ideas off (each other) and I know they have all these connections.

“So, when I say the (Boomers) are my second family, it is not just the guys, we’ve all grown up and seen everyone’s families grow.

“It is a pretty close connection that we have, but the sacrifices that our wives make – there is nothing greater – it is crazy.”

“Every year I’ve moved, and I’ve taken Rach away from whatever support network,” he said.

“But she has been able to build up for herself in the last 12 months and then I throw her into a brand-new place and say have another crack at finding doctors and schools.

“So, she is a bit of a wizard at picking up from absolutely nothing.”