Wollongong: Red-hot perimeter shooting has powered the Perth Wildcats to a convincing 99-77 NBL victory over the Illawarra Hawks. 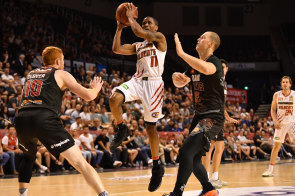 Bryce Cotton shoots for the Wildcats in Wollongong on Friday night.Credit:AAP

The defending champions came into Friday's clash at WIN Entertainment Centre on a two-game losing streak, but blew the home side away with a devastating long-range shooting display.

After making a dismal 4 from 19 shots from beyond the arc in last Sunday's loss in Brisbane, Perth lit up the Hawks with 12 first-half triples to lead by as many as 26 points on the way to their 14th win of the season.

Bryce Cotton drilled seven of the Wildcats' 17 three-pointers for the game to lead his team with 23 points, while Mitch Norton, Clint Steindl and Jesse Wagstaff were also on target from beyond the arc.

"We've got to stay true to who we are, we have shooters out here," Cotton said after Perth overcame their offensive struggles to close their four-game road trip on a positive note.

"We have shooters out here – sometimes the ball's going to fall, sometimes it's not, but we've got to be the players we are."

The result keeps second-placed Perth in touch with ladder leaders Sydney, while adding further distance from the pack of top-four aspirants, headed by the in-form Cairns Taipans.

Todd Blanchfield led the way for Illawarra with 26 points and eight rebounds while Sunday Dech added 15.

"I guess it's nice to make some shots but at the end of the day, we are all over losing," Blanchfield said after the bottom-placed Hawks saw their record drop to 5-16 for the season.

Norton and Cotton combined for five three-pointers in the opening quarter to set up a 27-17 lead before Perth opened the second period with six consecutive triples to build 26-point advantage.

Perth had connected on 11 three-pointers before Dech finally nailed Illawarra's first as the home side rallied to reduce the margin to 54-36 at halftime.

The Hawks kept pace with the visitors in the third quarter before running off nine straight points in the final minute to give themselves an outside chance, entering the fourth down 73-60.

An AJ Ogilvy dunk cut Perth's lead to 11 early in the final quarter but Kay followed up a hookshot with another three-pointer to put the result beyond doubt.