Another massive rebounding effort from emerging South East Melbourne forward Dane Pineau helped his side to a 90-82 away win over Illawarra and kept them in the NBL play-off hunt.

A 17-0 second-quarter run to the Phoenix, which turned a nine-point deficit into an eight-point lead, swung yesterday’s game in Wollongong in the visitors’ favour. 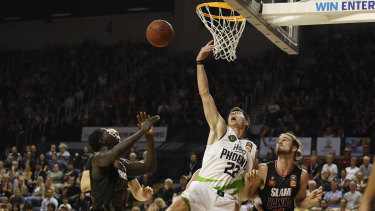 Up for grabs: South East Melbourne’s Dane Pineau battles for a rebound against the Hawks at WIN Entertainment Stadium in Wollongong.Credit:Getty Images

The Phoenix led by as much as 18 points in the third quarter, but a resurgent Hawks slashed the deficit to two with just over four minutes to go.

The visitors closed out the win to move above the New Zealand Breakers into seventh place. Pineau, who is considered a strong contender for the league’s most-improved player award, was a huge factor despite racking up three fouls well before half-time.

He made all seven of his field-goal attempts, and finished the game with 14points, 18 rebounds and three blocks.

The performance followed up a 17 point-20 rebound effort in the Phoenix’s last game.
Kendall Stephens was another big contributor for South East Melbourne, coming off the bench to score 20 points and making six three-pointers. 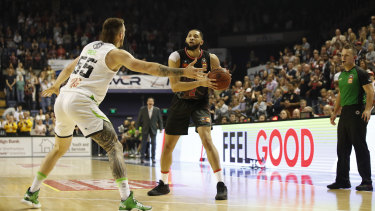 On guard: Mitchell Creek of the Phoenix, left, blocks Darlington Hobson of the Hawks.Credit:Getty Images

Conversely, Illawarra made just three of 20 long bombs, while the Phoenix connected with 12. Between them, the two teams missed their first nine field-goal efforts, but the Hawks scored the last six points of the first quarter to lead 26-18 at the end of the term.

It wasn’t all plain sailing for the Phoenix, who had 11 turnovers after two quarters and Tai Wesley missed his first six field-goal attempts before finally making one in the third quarter.