The Philadelphia 76ers seized control in a 51-point third quarter, set a team record for points in a quarter and a playoff game, and evened their first-round series at one game apiece with a 145-123 victory over the visiting Brooklyn Nets on Monday night.

Joel Embiid collected 23 points and 10 rebounds to lead Philadelphia. For the second straight time, Embiid was a game-time decision due to the lingering tendinitis in his left knee, but he played in both contests. 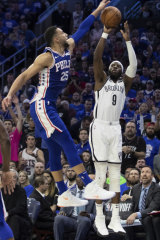 Embiid totalled 13 points and five rebounds in the third quarter as Philadelphia shot at 72 per cent and outscored Brooklyn 51-23.

Embiid's dominance occurred after he was called for a flagrant-one foul on Jarrett Allen with 35.6 seconds left in the first half.

Philadelphia also matched the 1962 Los Angeles Lakers for the most points scored in a quarter in a playoff game. It was the 13th time a team scored at least 145 points in a playoff game and the first instance in a regulation game since the Boston Celtics put up 157 points in 1990 against the New York Knicks.

Ben Simmons contributed his second career post-season triple-double with 18 points, 12 assists and 10 rebounds. He joined Wilt Chamberlain and Charles Barkley as the only Sixers to get multiple triple-doubles in playoff action, and he exited to a standing ovation from fans after criticising their booing following game one.

Tobias Harris added 19 points, JJ Redick contributed 17, reserve centre Boban Marjanovic chipped in 16 and Mike Scott had 15 for Philadelphia, which shot 56.1 per cent from the floor.

Spencer Dinwiddie scored 19 and D'Angelo Russell added 16 for the Nets, who set a team record for points allowed in a post-season game. Rondae Hollis-Jefferson added 15 while Caris LeVert and Shabazz Napier had 13 apiece.

After starting slowly, Embiid fueled a 21-2 blitz to start the third to turn a 65-64 half-time lead to an 86-66 edge. He started it with a 10-foot jumper, converted a three-point play, hit a short fadeaway along the baseline and hit two free throws.

Embiid checked out with 7:02 remaining in the third and the Nets made a small dent, getting within 89-74 on a layup by Dinwiddie with 5:57 remaining. Following a timeout, the Sixers countered with a 15-5 run to grab a 104-79 lead on a put-back by James Ennis III.

Philadelphia took a 116-87 lead into the fourth after Scott hit a buzzer-beating jumper.

The Nets were unable to take their first 2-0 playoff lead since sweeping the Knicks in the 2004 first round, largely because they had few answers for Embiid. Jared Dudley, who constantly harassed Embiid in game one, sat out due to a calf injury, and Ed Davis picked up a third foul early in the second quarter.