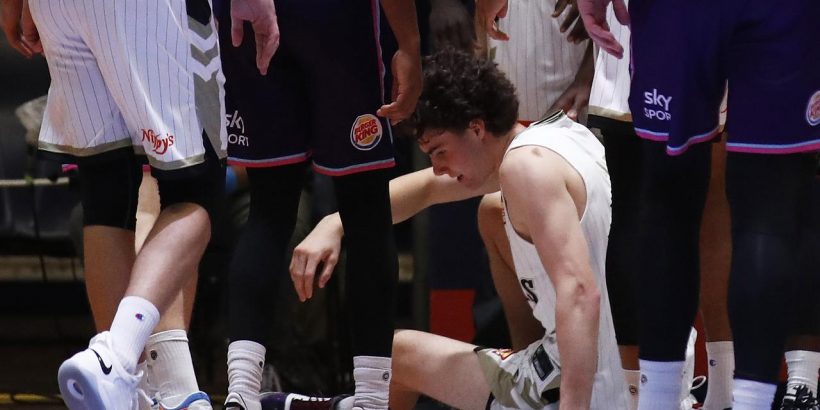 Slippery NBL decals are back on the agenda after NBA-bound Australian young-gun Josh Giddey went scary-close to a serious injury on Monday night.

Giddey slipped on an NBL logo placed in the charge circle under the basket during the third quarter during Adelaide’s loss to the New Zealand Breakers.

Thankfully, the projected first-round NBA draft pick walked away unscathed despite falling awkwardly and grabbing at his thigh while wincing in pain.

Giddey went on to finish with 12 points, 10 rebounds and 10 assists and become the youngest Australian in NBL history to record a triple double.

He has also recorded the most assists by a local player in their first NBL season with 171 dimes thus far.

Josh Giddey of the 36ers reacts after falling to the floor during the round 15 NBL match between the New Zealand Breakers and the Adelaide 36ers at Silverdome in Launceston. Photo: Daniel Pockett/Getty Images.Source:Getty Images

The commentators immediately reacted to the incident, declaring: “That isn’t a good look – he is a very sore boy.

“That is no good – grasping straight to the outside part of that left thigh.

“That is not what we want to see.”

Moldovan’s comment sparked a flurry of comments as to why the NBL decal is placed in the charge circle under the basket.

“Not sure why non sponsored decals are required in the charge circle. Lucky Giddey seems ok,” one fan said.

“The NBL (logo) is the most intriguing one too. Hard to explain,” Bogut said.

The NBL have addressed the issue on several occasions after the Australian Basketball Players’ Association pushed for change.

Adelaide star Josh Giddey slipped on an NBL sponsorship logo placed in the charge circle under the basket during the third quarter during Adelaide’s loss to the New Zealand Breakers. Photo: Daniel Pockett/Getty Images.Source:Getty Images

Back in March, the league declared it will use new decals on courts across Australia for the remainder of the season. “At the start of this season we had to introduce new decals in order to meet the requirements stipulated by FIBA,” NBL Commissioner Jeremy Loeliger said.

“We have since reviewed their use and they have undergone rigorous testing. “At the same time, we also engaged FIBA accredited testers to test the product we used last season and worked closely the Australian Basketball Players’ Association to address this issue.

“This testing has shown the decals we used last season meet the required FIBA non-slip standards and are more effective in most circumstances.

“With the support of the ABPA we have made the decision to use these decals for the remainder of the season at all venues across Australia.”

Despite these changes, the NBL logo under the basket remains a safety hazard for players as shown through the Giddey incident.

The NBL declined to comment when contacted on Tuesday.