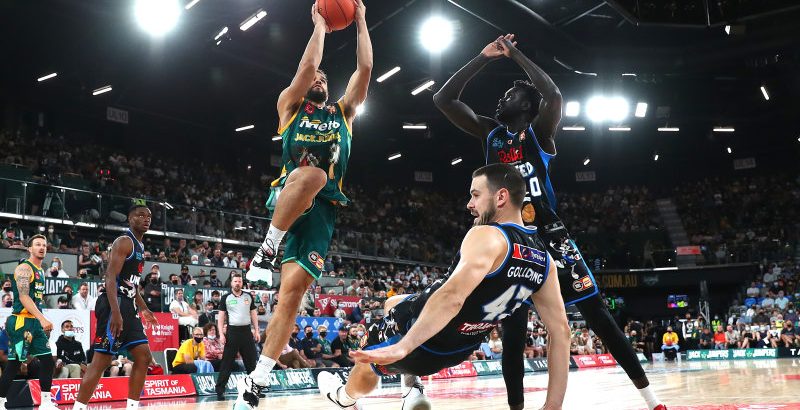 In almost any metric, Melbourne United are giants and first-year franchise the Tasmania JackJumpers are indeed ants when it comes to life in the NBL.

But the undersized upstarts provided plenty of resistance in Hobart on Saturday before the defending champions outlasted the hosts 76-72. 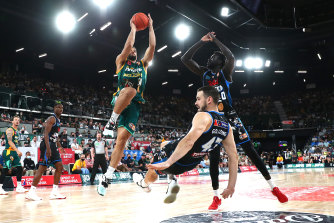 Sam McDaniel drives to the basket for the JackJumpers.Credit:Getty Images

The home side lost 208-centimetre NBA power forward Will Magnay due to COVID-19 rules and were also without development centre Jock Perry (218cm), but they fought on bravely despite the height disadvantage (forward Fabian Krslovic, 203cms, was their tallest).

Tasmania remained in the contest until the final minutes and it was only the determination of United forward Jack White and a timely charge from Matthew Dellavedova that made sure United claimed their fourth game in a row.

For many sides that size discrepancy would be a tidy excuse to take the honourable loss. But the JackJumpers pushed out their defence and made life uncomfortable for the star-studded United. It worked for much of the game as Tasmania took a 10-point lead in the second quarter, forcing their opponents into an uncharacteristic 11 turnovers in the first half. 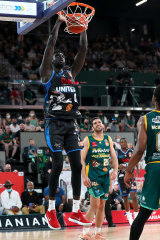 United fought back to lead by one at half-time as 211-centimetre centre Jo Lual-Acuil (13 of his 19 points coming in the half) and 213-centimetre Ariel Hukporti (nine of his 11 points) enjoyed their mismatches.

The two sides couldn’t be split through much of the second half until some key baskets from Caleb Agada and White pushed United’s lead to six with three minutes to play.

In a key moment, Dellavedova took a charge on JackJumpers import Mikyle Mcintosh when the forward had an open drive to the basket and the home side the momentum.

The JackJumpers would close to 74-70 with under 20 seconds to play but couldn’t find space for import shooter Josh Adams (23 points) to get them any closer.

Lual-Acuil found room for a two-handed dunk with nine seconds left to seal victory. While Melbourne towered over the JackJumpers, they only narrowly avoided being cut down to size.

United won the rebound count 46-30 but were forced into 22 turnovers for the game. Melbourne also made plenty of their fast-break opportunities, winning that stat 24-12.