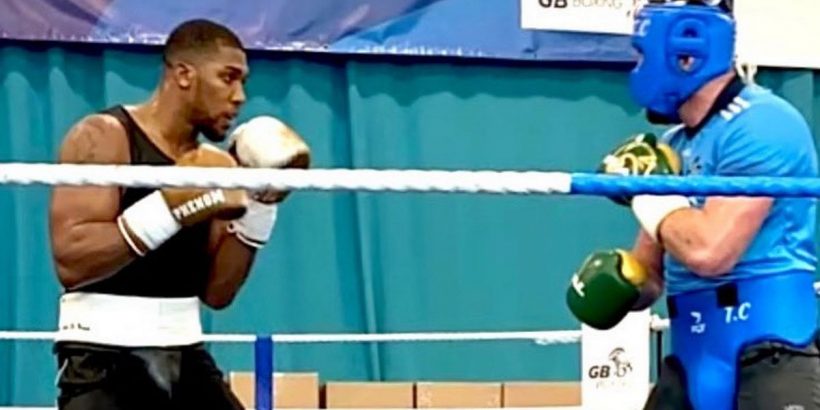 Carty, who boxes out of the southpaw stance, is expected to ‘emulate Oleksandr Usyk’ throughout Joshua’s training camp, after joining up with AJ’s team following his successful professional boxing debut last month.

Despite Carty’s relative inexperience in the professional boxing ring, the fact that he is a natural southpaw is clearly beneficial to Joshua.

Aside from Cuban veteran Luis Ortiz and Usyk himself, there is a real absence of southpaws in boxing’s heaviest weight class. The opportunity for AJ to gain experience against a ‘lefty’, albeit not one as skilled as Usyk, is hugely valuable and will undoubtedly improve his chances against the former cruiserweight king when they clash in September.

In a recent interview with Sky Sports, Carty discussed his sparring sessions with Joshua and it’s clear he’s hugely grateful for the experience.

“No ego whatsoever. Sparring is just sparring. There are no liberties taken.

“Nobody has asked anything in particular of me. I am left-handed and I'm light on my feet, I utilise a lot of movement, so I naturally emulate Usyk.

“AJ is a gent. He's a normal bloke, nothing crazy. He's the heavyweight champion but he's just an average bloke. A really nice fella.

“I have the same goals. Iron sharpens iron.”

Do you think Anthony Joshua will defeat Oleksandr Usyk when they meet in September? Let us know in the comments section below.

Carty also took a moment to discuss his goals for his own professional boxing career, with the Irishman confident about what he can achieve in the future.

“It's a long journey. I had my first pro week just two weeks ago. But one day I hope to be in AJ's position otherwise I wouldn't be doing it.

“If I wasn't good enough, I wouldn't be doing this. It's a hard, hard game and not enough people make what they want out of it.

“I have realistic expectations – and they are to be heavyweight champion of the world one day.”

Anthony Joshua is set to face former cruiserweight king Oleksandr Usyk in a bout expected to take place in September at the Tottenham Hotspur Stadium in London. It will be Usyk’s third bout at heavyweight and Joshua’s WBA, IBF and WBO belts will all be on the line.