Anthony Joshua knocked out his third opponent on a crazy heavyweight night where James ‘Lights Out’ Toney was the star attraction. It was a Prizefighter tournament eventually won by Michael Sprott, who received the trophy from the legendary Larry Holmes.

Prizefighter: UK vs USA International Heavyweights was a one-night eight-man tournament in 2013 in London’s east end – each bout was just three rounds, and the 83-fight multi-weight champion Toney was a surprise inclusion, still slugging away at the ripe old age of 45.

This is the story of a uniquely bonkers night in heavyweight history featuring a pre-fight dinner where advice was exchanged, offensiveness from a “past-his-best” Toney, and a “powerhouse” known as AJ who would find two future victims on this night… 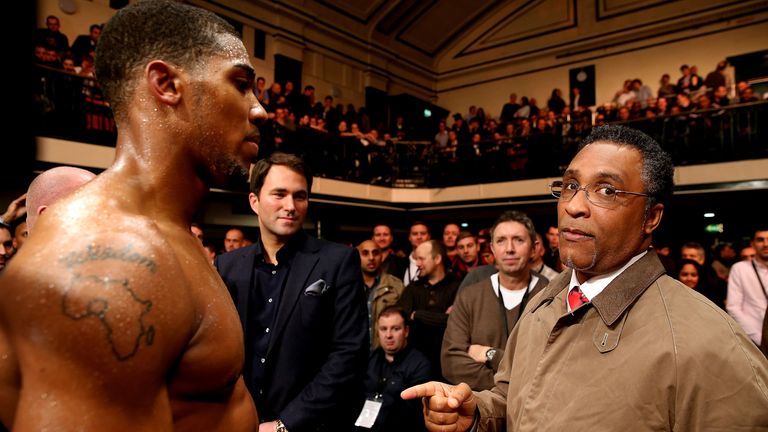 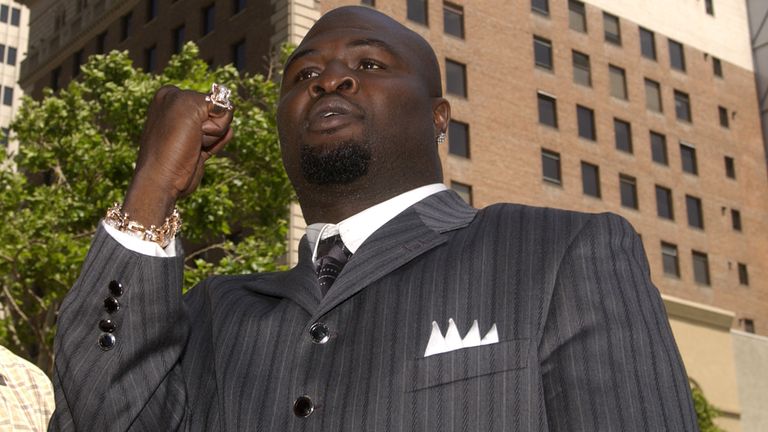 Michael Sprott said: I’m a big fan of James Toney so I was overwhelmed at the thought of fighting a legend. He was past his best days but was still dangerous. He still had a good chin and is the best counter-puncher in boxing history.

Jason Gavern said: James came into this tournament with the ‘Lights Out’ name. Wow! But James knew he was on the final legs of his career.

Matt Legg said: I’d been watching his fights on YouTube just before Prizefighter was announced. When I was drawn against him I had a big smile on my face because I knew that, whatever happened, I would get to fight a bona fide legend. He’s got one of the best chins, he went from middleweight to heavyweight, never got knocked out, he’s amazing. I was over the moon to be drawn against him.

James Toney appeared on Sky Sports‘ Ringside the week before, blasting the current heavyweight scene as “terrible” and insisting that Anthony Joshua (then with a 2-0 record) would beat Deontay Wilder (then with a 32-0 record and on the verge of winning the WBC title) “right now”. 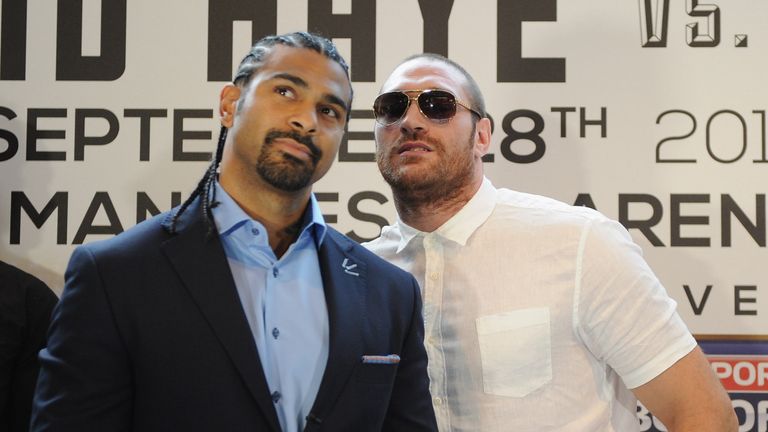 That would be perfect. Haye will knock him out. Fury can’t even spell ‘fight’. He’s fought nobody. Haye has been around longer and should knock him out in three or four rounds.

Matt Legg said: We stayed in the hotel with the American fighters the night before. We all had dinners together apart from Toney. He was a bit… erm… he upset a few people beforehand.

He kept himself in his room and stayed away from all the fighters. He was rude to people.

The British lads were a bit put off but the Americans said: ‘That’s just James – he’s unpredictable and temperamental’.

Brian Minto said: He’s always like that! In sparring he talks smack, that’s the way he is. He’s just that way. One time, when I was training in LA with Freddie Roach, he called me on the phone and was talking all kinds of smack! Saying he was going to kick my ass! That’s just him, he’s a clown.

Toney was friendly to me but we didn’t have much conversation. He probably expected to win the whole thing.

Michael Sprott said: Everyone bonded well but the only person who didn’t was Toney. When we did a photoshoot he was shouting and making a fuss. ‘No I won’t do that! I’m going back to my room!’

He was moody and hard to operate with. He came across that way but, actually, he was cool. 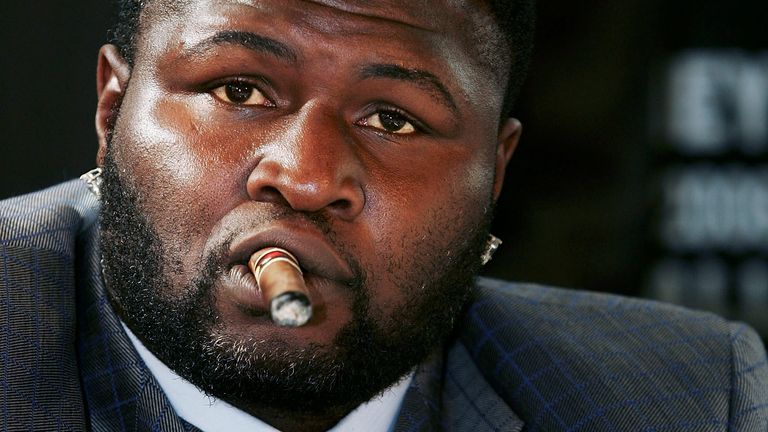 Jason Gavern said: He was extremely difficult the whole time – but he always has been. Any time I’ve been in camp with him, he has been difficult.

He had a persona that he had to be an asshole the entire time. I don’t know why. That’s just who he is.

I felt like it was a gift to even be in the tournament – he was old and inactive. He was only included because they wanted the name ‘James Toney’.

Tom Little said: Me and Toney got into an altercation. He was weird. He was too big-time for the whole thing. I wasn’t having a dig at him but I said to him: ‘This is a disgrace to your legacy because a man who has achieved what you have achieved should be at home with a pipe and slippers, watching the boxing not taking part!’

I told him: ‘You are an old man and I’ll splatter you but I’d never lace the gloves of a young James Toney’.

He didn’t take that very well.

I didn’t want to have a legend on my record who was over the hill. His reactions weren’t what they were. Over three rounds I could have had his name on my record. But it wasn’t to be.

Me and the British lads said: ‘We can’t let an American win this’. 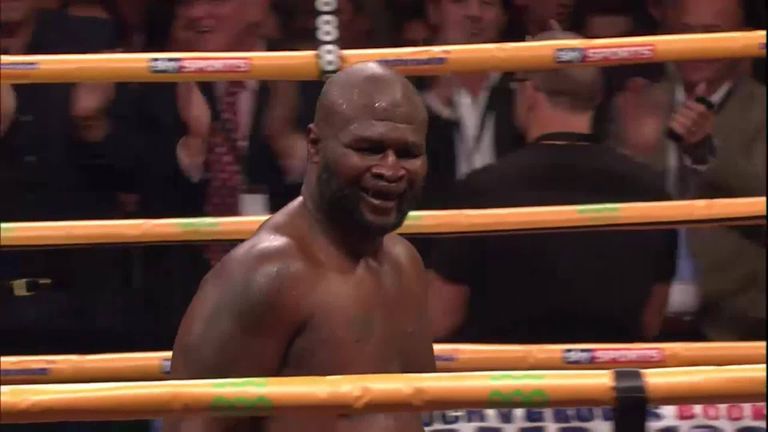 Toney, aged 45 and woefully out of shape, won his quarter-final against Legg with a third-round TKO.

Matt Legg said: I’d just come back after six years out of boxing. I had one comeback fight when I beat an unbeaten Latvian who Hughie Fury was supposed to fight. He was an unknown quantity but I beat him. I was 38 and, luckily, I got the call about Prizefighter so said “definitely”.

Initially Shannon Briggs was meant to be in it. Then it was Toney.

Jason Gavern said: In Matt’s mind he was thinking: ‘Oh my god it’s James Toney’. That had something to do with the way he lost.

Matt Legg said: My normal style of fighting is to attack. But when we were sat at dinner the night before, Jason Gavern gave me some advice. He said: ‘Do not try to knock Toney out. Nobody will knock him out. He cannot be knocked out. Touch him lightly and move because he’s not good on his feet anymore’.

Gavern knew these things because he had been Toney’s sparring partner. Gavern had the advantage of not being in awe of Toney. He knew him quite well inside and outside the ring. Gavern didn’t have the respect that I had.

So I boxed a different style to normal. I caught him with a couple, warmed into it. I threw some careless right hands and he slipped and countered, one of his most famous punches. I was blocking his shots and thought: ‘He doesn’t have any power’. I started to feel relaxed.

I underestimated him but he wasn’t going full-on. In the third round he let a few big ones go. He wasn’t a massive one-punch knockout artist at his age, but he caught me on the chin. 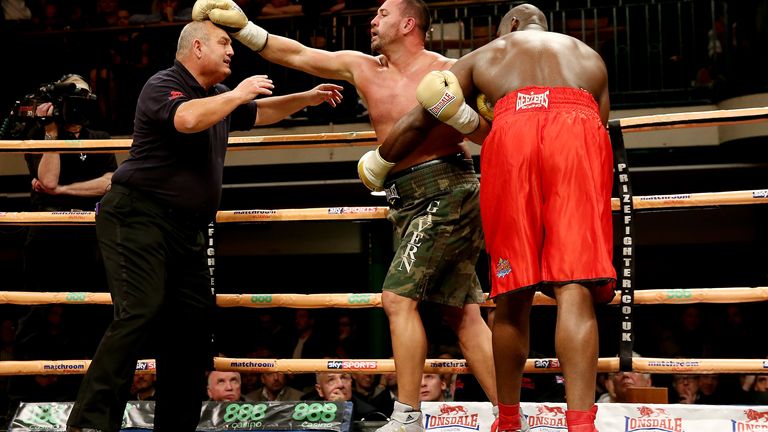 Former British and European champion Sprott beat Wills in their quarter-final, the only member of Team UK to win a fight…

Michael Sprott said: He was the biggest guy out of all of them, a massive guy. Whenever I did Prizefighter I always had a hard fight in the first one, I never had it easy. He was a big, hard guy but I out-boxed him. I had won Prizefighter before so had experience going in.

Little, in just his fifth pro bout, was edged out via split decision by 43-fight veteran Minto…

We both sabotaged each other and neither of us would have been able to do anything in the next round anyway. I walked away with my head held high – I’d only had four fights before.

Brian Minto said: I knocked him down with a body shot which sealed it. 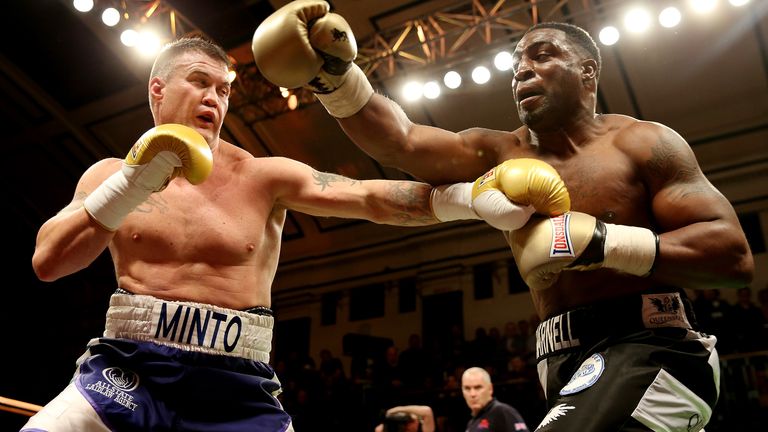 Sprott got the nod against Minto in their semi-final…

Brian Minto: I thought I edged Sprott and deserved to go to the final. I let him get off with his jab, I was trying to feel him out. I wobbled him all over the place and thought he’d go out but he held on. If I knocked him down, I would have definitely won.

Michael Sprott said: I deserved to win. I was jabbing. He caught me on the ropes a few times but it wasn’t enough for him to win. I won it with my jab, my movement, my experience.

Brian Minto said: You’ve got to put a lot of energy into those three rounds, that’s a must. But you have an adrenaline dump between fights. I fought a cruiserweight tournament in Australia but got robbed – I thought that I deserved two out of three rounds against [current UFC champion] Israel Adesanya.

That style of fighting is not easy, man. You have to learn to pace yourself. Some guys take four rounds to get into their groove but you don’t have a chance to do that.

You heat up then cool down. It tests your will and endurance. Jason Gavern said: I was James’ sparring partner for three years, during 2006, 2007 and 2008 at Hollywood’s Wild Card gym with Freddie Roach. We’d known each other for years and had a good relationship.

I didn’t look at him as a multi-weight world champion. I wasn’t intimidated and I didn’t have too much respect. We’ve done hundreds of rounds together. I just looked at him as James. He’s like family.

James is a 12-round fighter. It takes him three rounds to warm up. He’s the older guy. I had the mind-set: ‘I have nothing to lose’. If I lost, no big deal. If I win, it will be amazing. It wasn’t the prettiest of fights but I definitely did enough, and I came out with a split-decision.

Michael Sprott said: I hoped to fight Toney in the final. But I knew Gavern sparred with Toney loads of times. Gavern knew Toney, Toney knew Gavern. I knew there wouldn’t be much in it, and it would be tight. I knew they couldn’t stop each other.

Matt Legg said: Toney was totally different after the fights, he was lovely. I saw him three days later in Milton Keynes. He said: ‘Hey, Matt Legg!’ We had a cuddle and a picture and he signed my gloves. He gave me advice too: ‘Don’t always throw hard punches, mix in some light and hard ones’. That’s what he did to me in our fight. 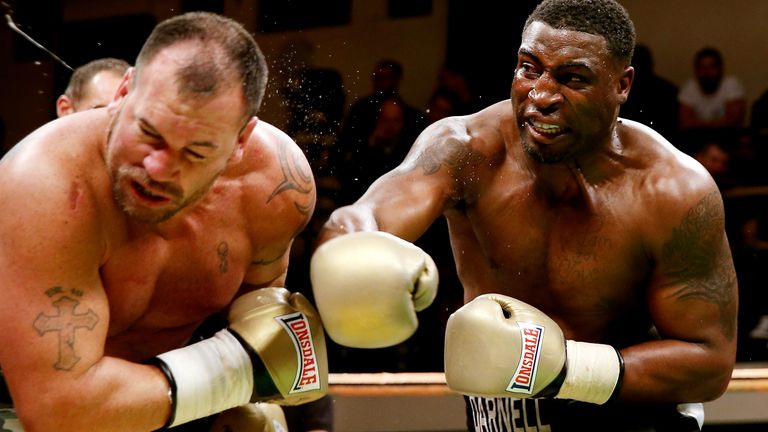 Sprott defeated Gavern in the final to be crowned Prizefighter winner for the second time, and he received a trophy from legendary heavyweight Larry Holmes…

Michael Sprott said: I caught him with a jab and a left hook. He was stunned but I didn’t expect to finish him. I played it by ear and won on points.

Brian Minto said: Gavern was hurt, he was wincing a lot. He won the first round but not the next two. Sprott has a long reach and a good jab.

Jason Gavern said: If I had to choose one guy to lose to, it would be Sprott. He is one of the most genuine guys in boxing, an awesome guy. In the second round I hurt my elbow. I’d torn a tendon which needed surgery. In the third round I didn’t throw a jab and couldn’t keep him off me because my arm was hurt too badly. I lost fair and square. Larry being there was a nice touch. Larry was a great heavyweight who never got the recognition he deserved. A great jabber who went on for a long time, a legend.

Meanwhile, the Olympic gold medal winner Anthony Joshua blew away his latest victim, Hrvoje Kisicek, in his third pro fight. Three Prizefighters, Gavern, Sprott and Legg, would challenge Joshua but would all succumb to brutal stoppages to the heavyweight division’s new force.