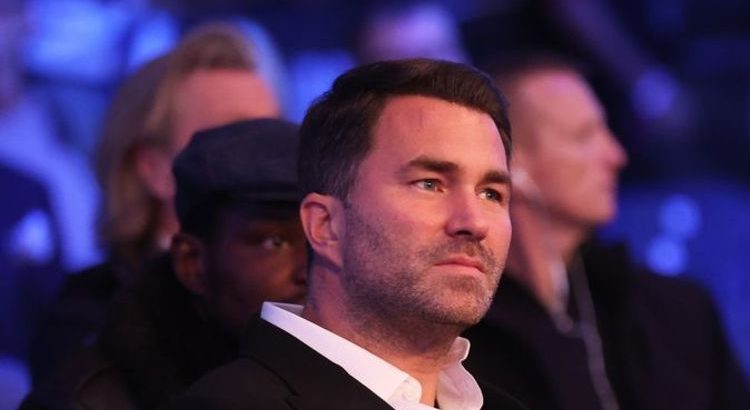 Anthony Joshua’s promoter Eddie Hearn has hinted at Tyson Fury’s next fight. Many are wondering who is next in line to challenge the undefeated WBC heavyweight champion following his sensational knockout victory over Deontay Wilder.

The pair engaged in battle for the third time and it was arguably the most exciting fight in their trilogy.

And Hearn, 42, believes The Gypsy King’s next challenger should be Dillian Whyte.

The 33-year-old will next step in the ring at the end of the month to face Otto Wallin and should he emerge victorious, the pair clashing over 12 rounds looks to be a distinct possibility.

Hearn spoke with iFL TV and outlined the future matches he would like to see take place in the heavyweight boxing division.

“Dillian Whyte is the mandatory for Tyson Fury, and that’ll be called in 30 days time,” Hearn said.

“Obviously, Dillian has a massive fight at the O2 with Otto Wallin,  but he’s the mandatory challenger for Tyson Fury. It’s a brilliant fight. I’d like to see Tyson back in the UK. He hasn’t boxed in the UK in three years or four years. It’s a massive fight for the division.

“You’ve got to give Dillian credit for going in there. He fought [Alexander] Povetkin before, and he had to come back and win that rematch.

“Now he goes in for another tough fight against Otto Wallin, and he’s ready to make a statement on October 30th and then move forward and fight Tyson Fury. He’s mandatory now.”

However, John Fury, Tyson’s father, is keen for his son to fight Oleskandr Usyk – who defeated Anthony Joshua last month and will face the Brit in a rematch next year.

The Ukranian is now the holder of WBA (Super), IBF, WBO and IBO and an undisputed unification fight with Fury would be a mouthwatering encounter.

“He’s gotta go look for Usyk or nothing, in my idea,’ he told talkSPORT. ‘It’s Usyk next, or nothing. I wouldn’t bother with the rest of them, they’re not in Tyson’s class.

“Would Dillian Whyte deal with Deontay Wilder? No. So why would they wanna put him in with my son and get him knocked out?

“Tyson can’t get up for them kind of fights. For me, I’ve told him, Usyk or don’t bother.”

But Hearn is adamant that fans would like to see Fury and Whyte go head to head and sees no reason why the champion would not want to take on Whyte.

“I don’t see why Tyson wouldn’t want to fight Dillian Whyte. It’s a huge payday and a massive event, and then the winner of that fight can go and fight the winner of AJ against Usyk,” Hearn continued.

“The WBC statement was quite clear. The winner of Fury against Wilder has to fight the interim world champion [Whyte]. If Fury becomes Franchise champion, we can’t do the undisputed fight.”

He added: “As fans, we should be calling for Tyson Fury vs Dillian Whyte. Imagine the build-up, imagine the fight.

“It does well over a million PPV buys, sells out a stadium. That is the fight. The winner fights the winner of Oleksandr Usyk vs Anthony Joshua II.”