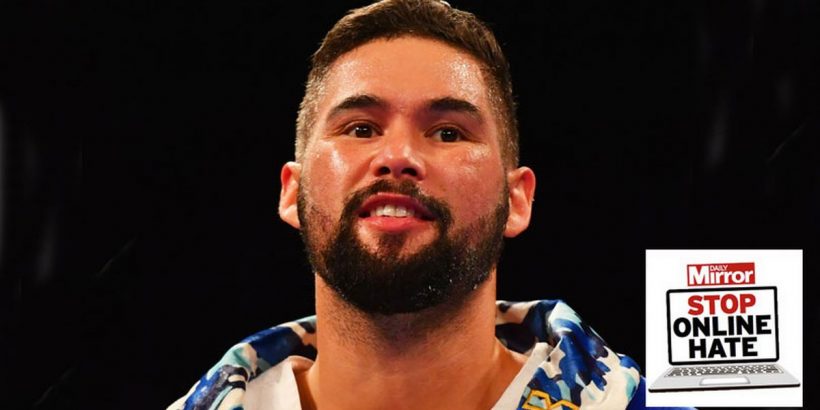 Ex-World boxing champ Tony Bellew has called social media firms a “disgrace” after trolls got away with targeting his gay brother.

The former British, Commonwealth, European and World boxing champion had tweeted: “Congratulations to me little brother Liam on the marriage to his partner Steve! Wishing you both all the luck & happiness in the world.”

Bellew said on Wednesday: “I put on a picture of my brother when he got married to his husband and the hate and things I received. Wishing death upon him because of his colour, because of his sexuality, it was just insane.”

But he said the trolls never took up his challenge to meet him face to face.

What is your view? Have your say in the comment section

He told BBC One’s Breakfast presenter Dan Walker: “I always put the same thing, ‘if you want to say something nasty to me, or you want to challenge and come at me just tell me when you see me’. I’m still yet to meet someone.”

The boxer added: “These social media companies are a disgrace for what they are doing.”

And he called for new rules forcing people to reveal their identities before being allowed to open social media accounts.

“The simple way forward and the only way out of this is a driver’s licence or a passport is put to an account,” he said.

Firms must remove offensive material that breaches community guidelines immediately. We propose incremental fines for failure to remove such content within a specified time. Firms should also be fined if they fail to remove persistent offenders. Firms must make guidelines more robust and comprehensive.

3 Automatic bans for anyone posting offensive material, including lifetime bans for repeated or especially offensive behaviour. Social media firms should explore a system of verification so it is easier to trace, remove and prosecute those spreading hatred.

“No-one is going to put a racist comment to someone knowing it can come right back to you and know who you are, where you are from.”

He added: “All you care about is the money that is coming in from sponsors and what you are making from the platform. You are not caring about the hate that is going out.

"And that is the saddest part about it.”

But he said individuals need to take responsibility for the comments they post.

Bellew, from Liverpool, added: “As well as the social media companies, people need to take accountability for their actions.”

The Mirror has launched our Stop Online Hate campaign to demand tech firms tackle the cowardly thugs who are turning social media into a cesspit of hatred.

Bellew, who starred as boxer Ricky Conlan in the 2015 Hollywood movie “Creed” alongside Sylvester Stallone, retired from the ring in 2018.

The newsletter is emailed out first thing every morning, at 12noon and every evening.

Never miss a moment by signing up to our newsletter here.

During his glittering career he won 30 of his 34 fights, including 20 knockouts.

His book, “Everybody Has a Plan Until They Get Punched in the Face: 12 Things Boxing Teaches You About Life,” is published on Thursday.