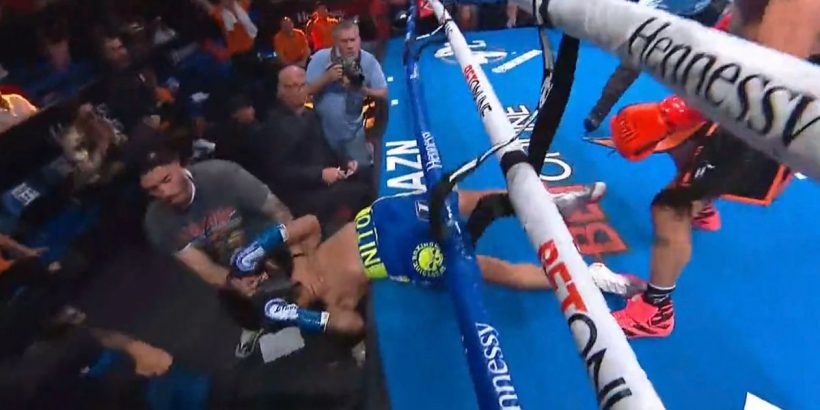 Boxing up-and-comer John Ramirez sent Jan Salvatierra flying out of the ring with a brutal knockout to claim the NABA super featherweight title.

The US star, known as ‘Scrappy’, delivered a brutal shot that connected with his opponent’s chin, sending him through the ropes and out of the ring in the first-round. The Mexican, 22, didn’t quite hit the floor, though. He was held up by a photographer outside, who then rolled him back in.

But referee Ivan Guillermo took a look at his face and waved that the contest at the Toyota Arena, in California, was over. “He made a mistake and he had to pay,” Ramirez brazenly said in the post-fight interview. “He was not on my level.”

He also told DAZN’s Chris Mannix after the fight: “Joshua Franco, [Jesse] Bam Rodriguez, anyone with a belt I’m coming for you.I’m not here to take part, I’m here to take over!”

Do you think this is the knockout of the year so far? Let us know in the comments section below

Former WBA and WBC (interim) super lightweight world champion Regis Prograis, upon seeing the finish, stated: “He will be champion.” Other boxing fans chimed in.

Someone quipped: “The cameraman deserves a performance bonus.” Another stated: “KO of the Decade nominee right there. Def KO of the year.”

A fourth wrote: “I would’ve quit my boxing career if that happened to me.” Someone stated: "Gotta be one of the craziest KO’s got held up in mid air and thrown back into the ring lol.”