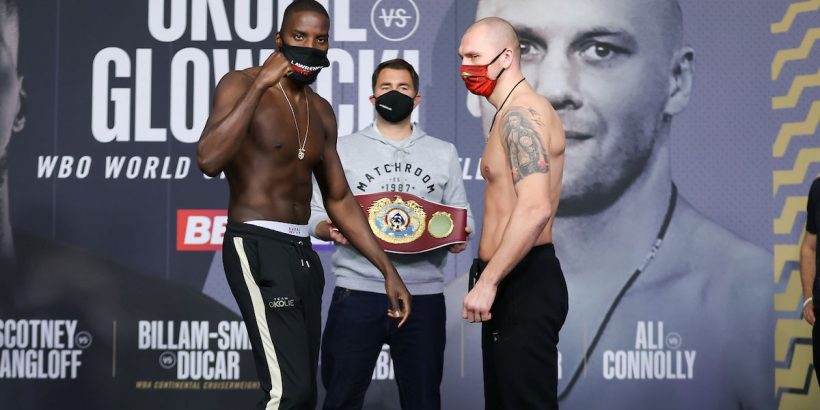 The fight, for the vacant WBO crown, was due to take place on the undercard of Anthony Joshua's world title defence against Kubrat Pulev last December.

But Glowacki tested positive for Covid-19 and was forced to pull out with Okolie instead stopping hapless replacement opponent Nikodem Jezewski.

The fight was quickly rearranged however and Okolie will tonight bid to follow in the footsteps of the likes of David Haye and Tony Bellew in becoming 200lb champions from these shores.

Here is everything you need to know about the fight…

What time is the fight on?

The main event is expected to start shortly after 10am while the undercard will start just after 7pm.

How to watch on TV and live stream

Sky Sports subscribers can stream the fights using the Sky Go player on their computer or mobile device.

"I think that everything's all about timing. It's been a good ride to get here, and I feel like it's my time to go out there and become world champion. There's nothing for me to be tense about, I've done all the training so it's just about going in there and getting it done.

"All the other stuff is extras, I'm here to enjoy my life to the best I can. In terms of boxing, Shane will tell you my training record shows I put 100 per cent every day in the gym which is why I’m able to go out and do what I do

"The most important thing is having self-belief. Every boxer believes in themselves, but I take it to another level. Some people call it arrogance, but I believe if you don't believe in yourself wholeheartedly, you're not going to be able to get onto a stage like this and still shine. I'm really excited about Saturday and do what needs to be done.

"I've done everything I need to do in training, so whatever eventuality happens, happens. However, in my mind, that's not going to happen. I need to show that I'm a level above even though my experience isn't necessarily there."

"This is a privilege for me, I will fight strongly and I'm very confident for Saturday night. Okolie is an undefeated fighter so I'm expecting a very tough fight. It will be a strong fight; we can guarantee it so you cannot miss this one."