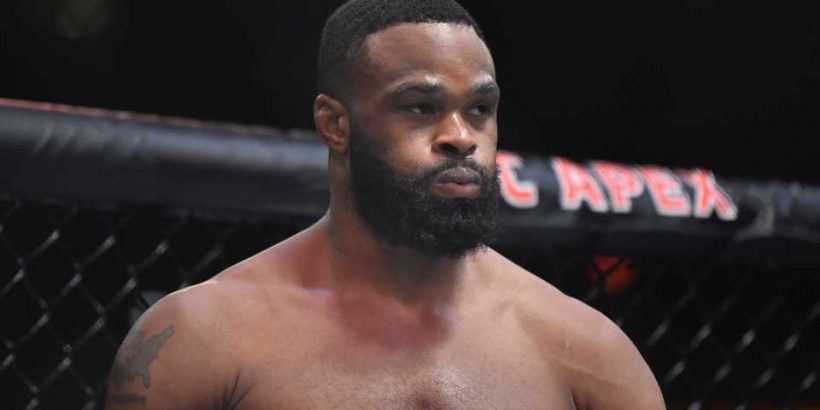 Former UFC welterweight champion Tyron Woodley will face YouTube star Jake Paul in an eight-round boxing match on Sunday at the Rocket Mortgage FieldHouse in Cleveland, Ohio. The bout, along with four undercard fights, will be broadcast via Showtime pay-per-view beginning at 8 p.m. ET.

Woodley, who is 39 years old, will be fighting in the first professional boxing match of his career. He was cut from the UFC following his fourth consecutive loss in March of 2021 and said he now plans on “boxing multiple fights.”

“This is an opportunity for me to sprint into the boxing lane, but also I’m preparing accordingly,” Woodley told ESPN . “I’m preparing if I was fighting Canelo (Alvarez). I’m training like that right now.”

Despite saying he has “always really been a boxer in a wrestler’s body,” Woodley does not have a background in boxing. He was an NCAA Division I wrestler at Missouri, becoming a two-time All-American and Big 12 champion in that span.

However, Woodley has worked with Eric Brown, who has been a mainstay at legendary trainer Freddie Roach’s Wild Card Boxing Club in Los Angeles for multiple years and instructed champions like Manny Pacquiao and James Toney, since 2008. Brown helped Woodley record 10 knockdowns during his UFC career, tied for the third-most in welterweight history despite appearing in only 16 fights, and five knockout/technical knockout victories.

Can Woodley put an end to Paul’s rise in combat sports? Here’s a closer look at how he has prepared for this fight.

Though he is yet to appear in a boxing match, Woodley has unquestioned power that will be more threatening than Paul’s previous opponents (YouTuber AnEsonGib , former NBA player Nate Robinson and former UFC fighter Ben Askren ).

Woodley has a knockout record of 7-2 and a pair of one-punch victories. He won the UFC welterweight title by flooring former champion Robbie Lawler with a right hook in July of 2016 and used a perfectly-placed right hand to knock out Josh Koscheck in November 2013.

It is this power that Woodley will look to bring to the ring on Sunday night, where he will have to adjust to 10-ounce, fully-wrapped gloves versus four-ounce gloves from the UFC.

He trained with Floyd Mayweather

Along with Brown, Woodley employed the services of Floyd Mayweather Jr., arguably the greatest pound-for-pound boxer of all time, to help him prepare to fight Paul.

On June 6, Mayweather fought Paul’s older brother, Jake Paul, in an exhibition match at the Hard Rock Stadium in Miami Gardens, Florida. Mayweather said before that bout  he would help train Woodley, and that happened in July, as evidenced by Woodley’s Instagram account.

“I’ve been buddies with Floyd for a while,” Woodley said to ESPN. “You guys can go back and look — I was actually supposed to train Floyd for the MMA, but obviously, everybody seen what happened with Logan and his fight and him and Jake, the interaction they had when they were out in Miami. And to be honest, I think he would have helped me anyway. But I think he took a little bit more invested interest to help me, not just for the Instagram, not for a couple ‘1-2’ here and there. He said, ‘No, we’re committed, me and my team, behind you.’”

Woodley also reportedly sought training from former super middleweight and light heavyweight champion Andre Ward, though it is unclear if that happened.

There is no doubt that Woodley is the most accomplished fighter that Paul has faced. But regardless, he isn’t being treated as a serious threat.

Paul has predicted he will knock out Woodley and told MMAJunkie  he is “exposing the UFC a bit with their striking capabilities.” Paul knocked out Askren in his latest fight, though Askren was more renowned as a wrestler and appeared in the UFC for just three fights, losing two of them.

“Boxers are more efficient, more precise, more conservative with their energy, scoring points,” Paul said in that interview. “It’s just a completely different ballgame, and a lot of people don’t really understand that. They just take it at face value, which is, ‘This is a fight.’ It’s not that. He’s coming into my territory, and as crazy as it sounds, I’m a much better boxer than him – even though he’s been doing it for five times as long.”