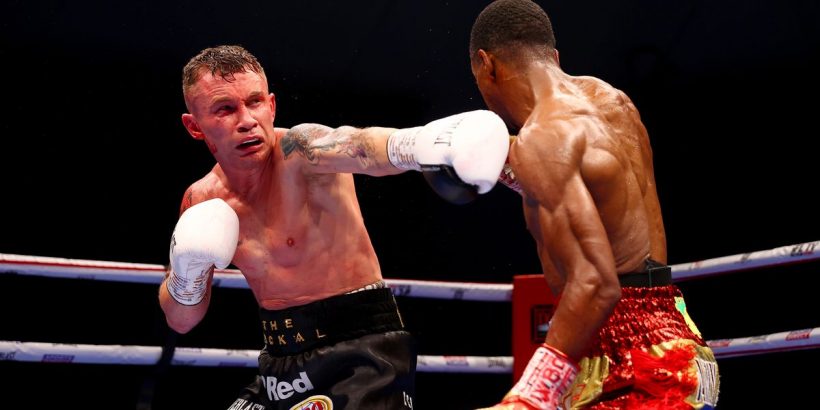 The Belfast boxer was stopped in the sixth round of his clash with WBO super-featherweight king Jamel Herring.

Frampton, 34, was floored in the fifth round before a left uppercut sent him to the deck again in the sixth.

Not even a horror cut on Herring's right eyelid could stop the American and help Frampton's hopes of history.

The towel came in from his corner to end his bid to add the WBO belt to his titles at super-bantamweight and featherweight.

Frampton, who was fighting back the tears during his post-fight interview, said: “I said before I would retire if I lost and that is what I'm exactly going to do.

“Boxing has been great to me, but it has also been bad to me.”

The fight took place in Dubai and it was a sad to see Frampton's bid for history take place in such a soulless venue. The Jackal was struggling in the opening round to find away inside Herring's seven-inch reach advantage.

The American was towering over him and using his southpaw jab to keep Frampton's attacks to a minimum.

Frampton did land with a good right at the start of the second but he couldn't keep out of the way of Herring's long arms.

The Jackal – in his 31st professional fight – lacked the sharpness needed to negate Herring's size advantage.

Frampton finally put some pressure on in the fourth and it led to a nasty cut opening up on Herring's right eyelid.

It was certainly the Belfast fighter's best round so far in the bout but he still had to swallow some big shots.

And it was one of those big lefts from the American southpaw which put Frampton down in the fifth.

Frampton easily beat the count but the end came in the sixth.

This time it was a cracking left uppercut from Herring which floored the Northern Irishman.

And this time Frampton was really hurt.

He managed to get to his feet just before the count of 10 and battle on but Herring's moment was coming.

Frampton tried to dig in but then the towel came in from trainer Jamie Moore and the referee waved it off to hand the Belfast man his third career defeat.