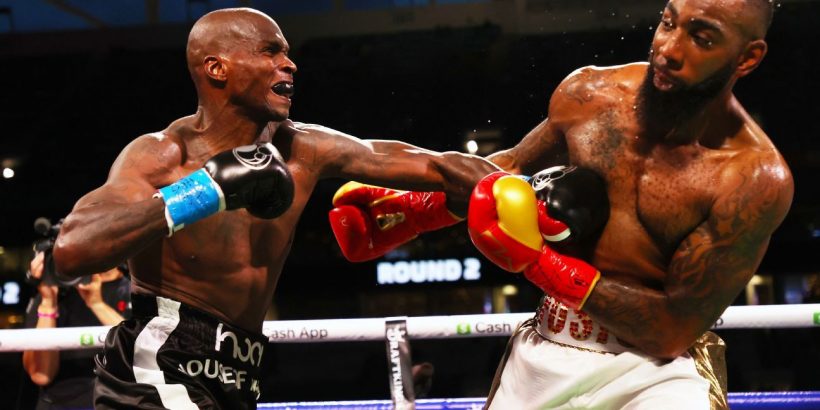 MIAMI — Chad Johnson’s boxing debut was off to a surprisingly impressive showing until midway through the fourth round when a big right hook from Brian Maxwell dropped him to the canvas.

Getting knocked down will be the highlight that comes out of Ochocinco’s journey into the ring Sunday night at Hard Rock Stadium.

Johnson, 43, can take pride in getting up from the punch as he finished the four-round exhibition against a professional combat fighter in Maxwell.

“My life has always been about taking chances and doing crazy stuff — this was on my bucket list,” Johnson said. “This was a message to everyone out there don’t be scared to take chances. Don’t be afraid to fail. It’s OK.”

The fight went the distance and there was no official judging so no winner was declared.

Maxwell is currently a bare knuckle fighter with an 0-3 record with two losses by knockouts. He also was 0-1 in standard boxing fights and 2-3 in MMA fights.

Johnson-Maxwell was the first fight on the main card of Floyd Mayweather vs. Logan Paul, and it was surprisingly entertaining for an exhibition bout.

There were plenty of NFL ties in the building to see Johnson’s first bout including Terrell Owens, who was in his corner showing him love after the fight. Other attendees included Miami Dolphins coach Brian Flores, rookie wide receiver Jaylen Waddle, former wideout Brandon Marshall and former linebacker Channing Crowder.

The crowd at Hard Rock Stadium was pro-Johnson, who is a Miami native. They gave him cheers before and after the fight.

Johnson spent two months training for this boxing opportunity including a few week with brother titlists Jermall and Jermell Charlo. He also did some work with UFC star Jorge Masvidal.

Johnson came out strong, winning the first round after landing a solid right jab and an impactful left hook multiple times. Johnson, who outlanded Maxwell 17-to-14 per CompuBox, would have had a strong argument to winning the bout before being knocked down in the fourth round.

Johnson told the “I Am Athlete” podcast that Mayweather manager Leonard Ellerbe offered him a chance to potentially make a “cool million” for this fight and that he couldn’t turn it down.

One week before the fight, Ochocinco told ESPN his goal was for “people who are buying tickets, people that are showing up, I want them to leave and say, ‘I doubted Ocho, but to see him get in the ring, knowing that someone tried to kill [him]. He put on one hell of a f—ing show.'”

The big story will be Johnson suffering a highlight and meme worthy knockout, but overall he did achieve his goal. He entertained and performed better than many expected.

“I lost my virginity tonight and it was fun,” Johnson said. “I think I’m ready for McGregor.”