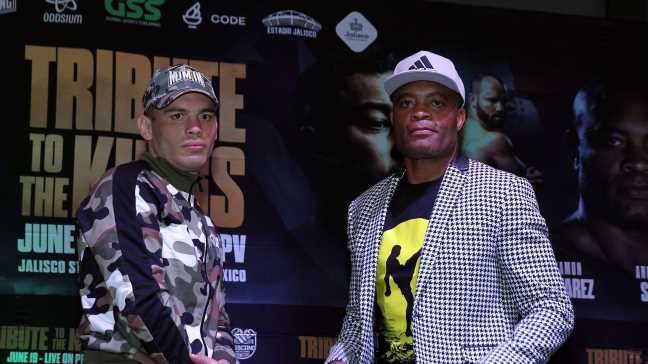 The son of the legendary Mexican boxer weighed in at 184 pounds Friday, two pounds over the contracted weight for his scheduled fight with UFC all-time great Anderson Silva, promotion officials confirmed with ESPN. The bout will go on Saturday in Guadalajara, Mexico, as part of an event called Tribute to the Kings. But Chavez Jr. will have to forfeit $100,000 of his purse to Silva, per officials. Silva weighed in right on the contracted mark of 182 pounds.

Chavez Jr. has had several struggles on the scales in his career. Most famously, he had to forfeit $1 million — a third of his purse — to Daniel Jacobs before a December 2019 bout.

Chavez Jr. has missed weight at least twice more in his career with other additional bouts having to be changed late to catchweights. This 182-pound bout is heavier than Chavez Jr. typically fights at. Most recently, Chavez Jr. has been competing at 175 pounds. And he fought Jacobs and Saul “Canelo” Alvarez at the contracted weight of 168 pounds.

Tribute to the Kings will also feature Julio Cesar Chavez Sr., 58, returning to the ring in an exhibition to face Hector Camacho Jr., the 42-year-old son of his fiercest rival.

Chavez Jr. (52-5-1, 1 NC) has dropped three of his past five bouts, but is coming off a fourth-round TKO over Jeyson Minda last November. The 35-year-old Mexico native is the former WBC middleweight champion.

Silva is 1-1 as a pro boxer and has not fought in the boxing ring since 2005. But “The Spider” is one of the most decorated champions in UFC history, holding the middleweight title for seven years — the longest reign ever in the UFC.

Silva, 46, also has the longest winning streak in UFC history (16). The Brazil native asked for his release from the UFC last year and it was granted. Silva has just one win in MMA since 2012 and has said he is likely done with mixed martial arts, though he might continue to purse interesting fights in other combat sports like boxing.