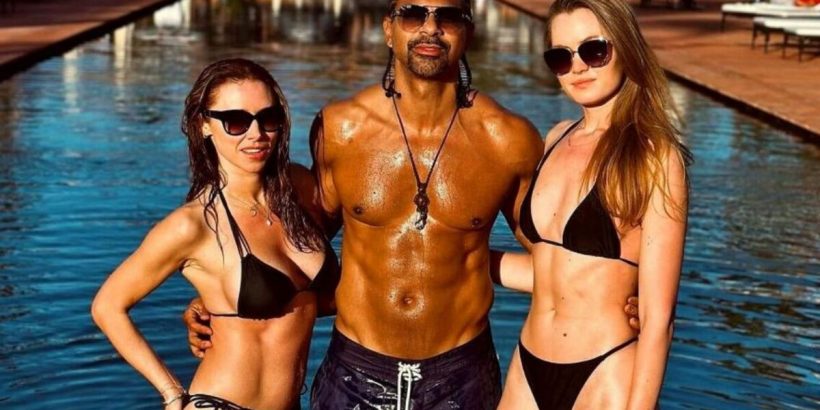 David Haye reveals his best heavyweight in the world

David Haye has addressed rumours that he is in a ‘throuple’ relationship with his partner of two years Sian Osborne and singer Una Healy. The former heavyweight and cruiserweight world champion recently posted numerous photos of the trio getting close on holiday leading fans to speculate.

The 42-year-old was quizzed on his three-way relationship while in Manchester carrying out broadcast duties for the Chris Eubank Jr vs Liam Smith fight last night and appeared to confirm the romance in an interview with Pro Boxing Fans.

“I like to keep my private life, private. I let people in through my social media a little bit, but what I do behind closed doors is between me and the girls involved,” he said. “So yeah, I don’t really want to go into all that.”

This comes after The Sun was told by a close friend of the couple that they had been searching for a second woman to join their relationship using the discreet dating app, Raya.

“David and Sian created a profile on Raya to find the perfect partner to enter their relationship,” the source disclosed. “The app is very exclusive and discreet – which was perfect for them exploring their options.

“As part of their profile they said they were ‘seeing what’s out there,’ and said they wanted to try ‘new experiences’. They spoke to a few people before being introduced to Una and they hit it off immediately.”

David, Sian and Una spent New Year together in Marrakech, Morocco with the latter sharing a photo of all three holding hands while out for dinner at a swanky restaurant.

David also posted a poolside snap with his arms around his two girlfriends, captioning the picture: “Happy new year and may 2023 be everything you hoped for. If a picture says a thousand words, then this one says exactly what it needs to.

“I’ve started Jan first with the correct energy, surrounding myself with understanding beautiful human beings, who do not judge, but instead accept me for my authentic self. The support I get from so many amazing friends and associates makes my world a much better place to live.”