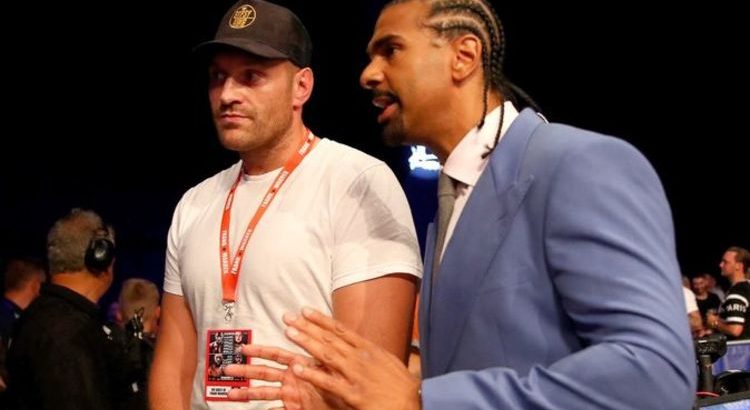 Tyson Fury compares himself to Muhammad Ali in 2015

Former heavyweight world champion David Haye said he was “one hundred per-cent serious” when he called out current WBC heavyweight champion Tyson Fury. The Hayemaker enjoyed a victorious exhibition fight against Joe Fournier in September and reaffirmed his long-standing desire to challenge the Gypsy King.

Fury overcame Deontay Wilder for a third time on Saturday night, knocking out the Bronze Bomber in the 11th round of what was one of the all-time classic heavyweight bouts.

However, this has not deterred Haye from restating his desire to one day fight Fury in a return match.

“I was one hundred per-cent serious,” Haye said to iFL TV.

“I said the only person I would put my body through a comeback for would be the number one heavyweight on the planet.

“There is no reason why I would punish myself and do what I need to do to put myself in a position to give myself any type of chance, unless it’s for the big one.

“And it does not get any bigger than that, I’d be a thousand-to-one underdog for good reason.

“Hopefully when Team Fury crunch the numbers, something is going to happen in the next two months where they’re going to be looking for an opponent.”

According to SportSkeeda, it is understood that Fury made around $30million (£22m) from his victory against Wilder in Las Vegas.

However, Haye feels both himself and Fury would also rake in significant amounts of money if they were to fight each other, as viewers from around the world would flock to see the two Brits take bout.

“I know how big-time boxing works, and when he works out what money is generated, with a Haymaker fight versus any of the other options, although they may be on paper more respectable, he knows it’s out there,” Haye continued.

“In the back of my mind, if it doesn’t happen in the next year, then it might happen in 10 years’ time.”

Haye has not fought competitively since being beaten by Tony Bellew for a second consecutive time at the O2 arena in 2018.

The 40-year-old retired with an impressive 28-4 record, in which 26 of those victories were won by knockout.

And he feels this experience during his 16 years of competing could be the antidote to the Gypsy King, who has looked imperious in his last two bouts with the Alabaman fighter.

“What someone needs to beat Fury hasn’t been shown before; there are little shades of him getting knocked down before, but he looks about as unbeatable as any heavyweight on the planet.

“He’s taken the biggest shot from the biggest heaviest puncher Deontay Wilder and found a way to win.

“How do you beat someone who is invincible? Well maybe experience can find a way.”