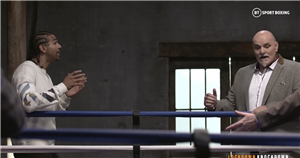 David Haye has rejected the chance to face Tyson Fury's father John in an exhibition match and would only return to face the heavyweight champion.

The 'Hayemaker' returned to the ring against friend Joe Fournier as part of a wager which he won by unanimous decision.

He called out the heavyweight champion Fury afterwards in an intriguing exhibition bout which Fury's father John responded to with an offer of his own.

But Haye has admitted he is unlikely to return to the ring himself and has backed Fury to instead pursue an undisputed British showdown with Anthony Joshua.

"No as I said I am retired, the only person I would come back for is the No.1," Haye told IFL TV. "If all of a sudden Tyson Fury suddenly came out and said I want to fight David Haye and we have some unfinished business from 2013.

"Yeah I would definitely consider it for sure, but it gets to a point where it is now about the money. Fury has earned good money from big fights with Wilder and everyone still wants the fight with Joshua even though he has lost.

"I like John Fury but maybe he is trying to get in the way, I saw an interview where he was very vocal about me not fighting Tyson maybe he sees something in me that he doesn't want in the ring with his son.

"Maybe that he is trying that offer to distract me from fighting his son."

Haye was set to fight Fury in a mega British showdown in 2013 but the fight was cancelled after he suffered an injury in the build-up to the grudge match.

And their war of words went down in history and has continued to come to fruition when the pair address each other's situations.

Fury's father John began his own feud with Haye in a boxing studio earlier this year when he offered him £100,000 in a bet that Fury would defeat Joshua in contrast to Haye's view.

Would David Haye have any chance of beating Tyson Fury? Let us know in the comments section below.

Then he later offered to fight Haye after accusing the former cruiserweight world champion of having a lack of respect to his family.

Speaking to the True Geordie podcast, Fury Sr previously said : "He's had his day in the sun. Let's move on from David Haye now because at the end of the day the man's nothing to talk about.

"I'll tell him to his face. I'm up and down BT Sport every weekend every month if he wants to try pull me on it he can pull me on it and we'll have a fight there and then. Fisticuffs, me and him.