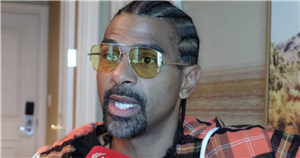 David Haye insists he still wants to return to the ring for a clash with Tyson Fury despite his emphatic win over Deontay Wilder at the weekend.

The Gypsy King retained his WBC heavyweight title on Saturday night following an enthralling battle with Wilder at Las Vegas' T-Mobile Arena, in which he climbed off the canvas twice to secure a dramatic 11th-round knockout.

By beating the American away from home for a second time on paper – and a third time in the eyes of many – Fury has etched his name into the history books alongside some of boxing's all-time great heavyweights.

He is rightfully regarded as the lineal champion in boxing's blue-riband division right now despite only owning one of the four recognised titles, with Oleksandr Usyk in possession of the other three after outclassing Anthony Joshua last month.

Yet, Fury's swashbuckling win over Wilder and unquestionable dominance at heavyweight is not enough to put Haye, 40, off of a fight with him.

Would you like to see Tyson Fury vs David Haye? Let us know in the comments section below.

The latter, who officially retired from boxing following a stoppage defeat against Tony Bellew in 2018, returned to the sport for an exhibition bout with good pal Joe Fournier last month and raised eyebrows by calling out the WBC chief afterwards.

Despite his breathtaking performance against Wilder in Sin City, Haye is still open to putting himself through the rigorous demands of a comeback if a fight with Fury is on the table.

When asked about the call-out during an interview with iFL TV, the former heavyweight and cruiserweight world champion said: “I was one hundred per-cent serious.

“I said the only person I would put my body through a comeback for would be the number one heavyweight on the planet.

“There is no reason why I would punish myself and do what I need to do to put myself in a position to give myself any type of chance, unless it’s for the big one.

“And it does not get any bigger than that, I’d be a thousand-to-one underdog for good reason.

“Hopefully when Team Fury crunch the numbers, something is going to happen in the next two months where they’re going to be looking for an opponent.”