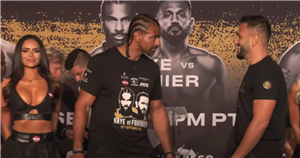 David Haye and Joe Fournier will both earn multi-million-pound purses for their heavyweight fight tonight.

Haye and Fournier will meet on the undercard of Evander Holyfield vs Vitor Belfort this Saturday. The fight – which has been sanctioned as a professional bout – will take place over eight rounds.

The fight is Haye's first since 2018 having retired from boxing after his stoppage loss to Tony Bellew in their rematch.

Haye revealed he will earn more for fighting Fournier than his first fight with Bellew – a figure reported to be upwards of £4m.

And Haye trashed Fournier's skills in the ring stating he could beat with two snapped Achilles.

He told Mirror Fighting last month: "He truly believes in his heart that he can beat me. It's quite funny, I find it amusing.

"He believes something is going to go drastically wrong with me and he reckons as long as he can get through the first few rounds it will then be his time – but to get through three or four rounds with me is very, very difficult.

"I'm not envisioning any version of this fight which ends with me losing."

"He believes if my Achilles snaps mid-fight then I won't be fighting for another five rounds. He has a strategy for a one-legged fighter but even if it does snap I still think… even with two snapped Achilles I'd find a way to beat him."

Haye ruptured his Achilles tendon in his 2017 loss to Bellew.

Fournier has won all nine of his professional bouts by knockout but none have come against any notable opponents.

The businessman turned boxer is close friends with Haye. A fight between the pair came around after an alcohol-infused meal in Mykonos.

Fournier was offended that former champion Haye said a fight between the two would only go one way. They both then agreed to settle it in the ring.

Who wins this weekend, Haye or Fournier? Let us know in the comments below

And Fournier said he will also earn upwards of £4m for the fight with Haye.

"That's the same kind of money as Billy Joe Saunders earned when he fought Canelo Alvarez; this is world title money, it's as big as it gets.

"David gave me my big break when I fought at The O2 so after that we became friends but it's like when you have a bigger brother and he gets all the love and I was like the second fiddle.

"The thought had crossed my mind as to whether I would beat David now. He has more experience and a way better skill set and ring craft and intelligence but I've never lost and I think this is a much closer fight than people think."