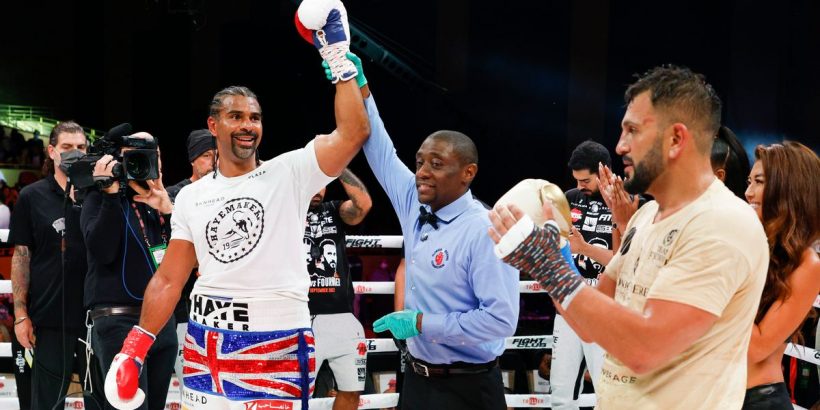 David Haye has ruled out another return to the ring after his win against Joe Fournier last night, unless he is to face Tyson Fury.

Haye came out of retirement to fight his friend and former sparring partner Fournier, winning a straightforward decision on the undercard of Evander Holyfield vs Vitor Belfort.

The fight lacked any real action as Haye outboxed his opponent to win by margins of 79-72 on two scorecards and 80-71 on one.

And Haye said after the fight he would only box again if it was against the WBC heavyweight champion Fury.

He said: "I'd only comeback for Tyson Fury. I don't wanna show him what I've got, I was able to win this fight without showing 'The Hayemaker'. I don't want him to know what I've got left, I want to surprise him on the night.

"[The fight] has been in my mind for a long time. Since 2013 when we were scheduled to fight, the fight didn't happen as I got an injury.

"I've always wanted that fight and I've seen him go from strength to strength he's got better and better. His reputation's up there, he's the lineal heavyweight champion of the world, so many people believe he's number one.

If I'm going to come into the sport of boxing in a real fight against someone special, that is the guy I know I can beat. I know his style and what he does well. My attributes don't work for his style.

"I think him and his team know that. I think maybe they think I'm a little old, so they probably will take the fight. But I'm looking for the biggest fight out there and you don't get much bigger than the 6'9 undefeated Tyson Fury."

Haye and Fury have twice signed to fight each other, but the fight has fell through both times.

A cut Haye suffered in training scrapped their 2013 fight and he was forced to pull out of the rescheduled fight the following year due to a shoulder injury.

Who wins in a fight between Fury and Haye? Let us know in the comments below

Haye didn't fight again until 2016 when he picked up stoppage wins against Mark De Mori and Arnold Gjergjaj. The Brit would retire following consecutive losses to Tony Bellew in 2017 and 2018.

And Haye admitted that he didn't want to let his hands go against Fournier as he feared it would make Fury turn down a fight with him.

He continued: "My overhand right… which I didn't even show in there tonight, I didn't want to scare him. If I'd have let my right hand go, he wouldn't be taking the fight.

"He thinks it would be an easy fight but's wrong. I know he's ducking Anthony Joshua but he doesn't want that work. We were supposed to fight in 2013 but I was injured but I'm healthy and I'm ready to go."