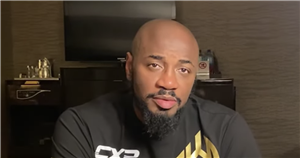 The Gypsy King, victorious in their second fight in February 2020, secured another success over the Bronze Bomber at the T-Mobile Arena in Las Vegas.

Fury knocked Wilder down in the third round, before he hit the canvas twice himself in the fourth round.

After that though the reigning WBC champion took control and was on course for a points victory before stopping Wilder in the eleventh round.

Following the fight Fury went over to his opponent as a show of respect but took issue with the American's response.

He said: "I went over and said well done and he said he didn’t want to show any sportsmanship or respect. Very surprised by that. He’s an idiot.

"Sore loser. To be a top fighting man you need to show guts and respect and he didn’t do that tonight. He couldn’t do it.

"I pray for him. I am thankful that we all get out of the right in one piece and get to go to our families."

Scott explained after the dust had settled that Wilder had issues with Fury before their trilogy bout and after slogging it out continued to hold those opinions.

He told ESNEWS : "Deontay looks at Fury as a man he had serious issues with concerning allegations and things he'd seen. After they released all that energy, he still felt the way he felt."

Wilder came into the fight with plenty of extra weight and was told by Fury that he'd made a mistake.

The Bronze Bomber, who has failed to beat his British opponent in three attempts, conceded his efforts weren't enough.

He said: “I did my best, but it wasn’t good enough tonight. I’m not sure what happened. I knew that he didn’t come in at 277lbs to be a ballet dancer.

"He came to lean on me, try to rough me up and he succeeded.”

Fury claimed his trilogy with Wilder, which begun back in December 2018 at the Staples Center in Los Angeles, was among the greatest in the sport's history.

"Like the great John Wayne said, Iron and steel baby," he said. "I give him the glory for the victory. He’s a tough man. He took some big shots tonight. It was a great fight, as good as any trilogy in history.

"And I want to say if it wasn’t for Sugar (Hill), America's and Detroit's own, I wouldn’t have gotten through that fight tonight… He told me, he said get your jab working, big guy, and throw that right hand down the middle. That's how the big dogs do it."

Fury now looks set to face domestic rival Dillian Whyte in his next contest, after the WBC enforced his mandatory challenge.