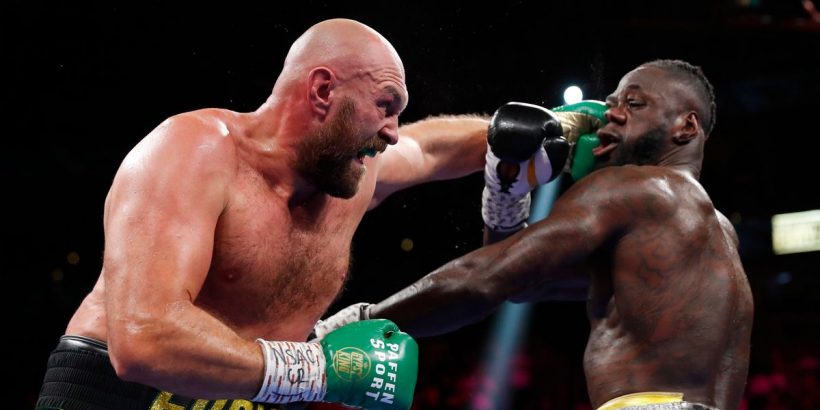 Deontay Wilder's coach claimed that Tyson Fury wore knuckle dusters when he beat the Bronze Bomber in their second fight in February 2020.

Jay Deas and other members of the Bronze Bomber's crew made a number of excuses as to why Fury had won the fight via a seventh round technical knockout last year.

These also included allegations surrounding the wrapping of Fury's gloves as well as the weight of the outfit Wilder had worn for the ring walk.

Deas was present in Fury's locker room as he had his gloves wrapped before Saturday's trilogy fight, which the Gypsy King won by knockout in the 11th round.

Fury also took the chance to mock Deas as he waited for his gloves to be wrapped as he joked "you missed the knuckle dusters last time".

The Brit was also critical of Deas' eagerness to check Fury was not cheating as he stated: "Eager, with how long we have. Make sure you have enough viewers this time."

Prior to the second fight, Deas had also watched Fury getting his gloves wrapped and had seen no issue with what he saw, only to claim that there had been tampering with the gloves that had led to Wilder's defeat.

However, Deas kept his job as Wilder's coach following the first loss of his career, unlike his head coach Mark Breland who was fired for throwing in the towel.

What is the craziest excuse Deontay Wilder has used for losing to Tyson Fury? Let us know in the comments section below.

Wilder even went on to use Breland throwing in the towel as an excuse as he bizarrely claimed that his former head coach had plotted his demise with Fury.

The Bronze Bomber also included Fury in his best knockouts during an Instagram Live prior to their trilogy fight, despite having never knocked the WBC champion out.

"Coldest knockouts? There’s so many," explained Wilder to his followers.

"I’m gonna give you the ones that pop out in my mind. Bermane Stiverne II – I transformed, I had an outer experience with him. It was so crazy.

"Artur Szpilka, Szpilka was another one. And the 12th round knockout of Fury, because I definitely knocked his ass out…

"I won that fight hands down."

Wilder had knocked Fury down in the 12th round, only for Fury to get back up and continue to the end of the fight as the judges scored it a draw back in December 2018.