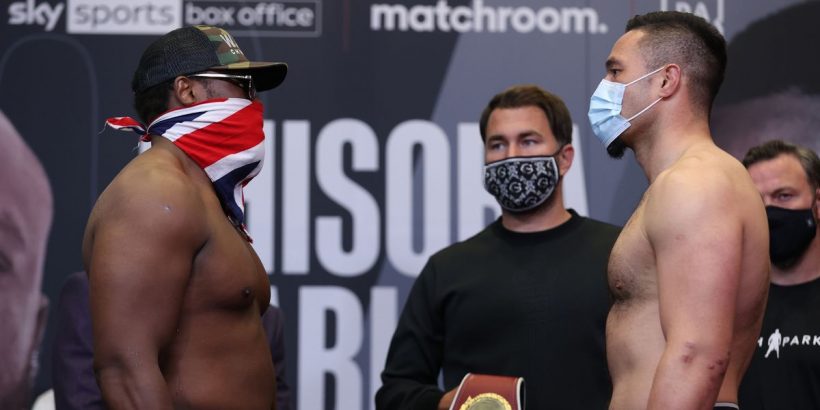 Derek Chisora has threatened to pull out of his fight with Joseph Parker after a row over who walks second to the ring.

The pair's teams were due to do a coin toss after the weigh-in today to decide it.

That was stipulated in the contract but Chisora decided after he stepped off the scales that he was walking second and didn't want the coin toss to happen.

He stormed out of the room and is currently adamant he will leave the hotel over the row.

Chisora's manager David Haye then took part in the coin toss hoping he would win to solve the issue.

But Parker won and his team are refusing to back down as they insist they will walk second.

Promoter Eddie Hearn reckons the row could rumble on right up until the fight on Saturday night.

Hearn has left it to Haye to sort out with his fighter.

The Matchroom chief doesn't fear the bout will be called off but there could be an issue with the British Boxing Board of Control if Chisora leaves the secure environment.

Hearn said: “I'm glad David Haye is his manager as he will now have to go try to sort it.

“But I think it will go on for a few hours at least, it may even go into the day of the fight right up until they walk.”

Chisora may have to retest and self isolate again as per the board's Covid-19 rules.

Parker's team are adamant they should walk second as the New Zealander is a former world champion and ranked higher in the world than Chisora.

The battled-hardened Brit is coming into the fight on the back of a defeat by Oleksandr Usyk in October.

The fight is due to be broadcast on Sky Sports Box Office from Manchester Arena.

Chisora stormed out of an interview with Sky Sports as the row over the entrance blew up after a calm weigh-in.