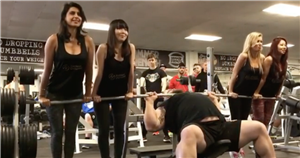 Eddie Hall has proven he still has his strength with the former World's Strongest Man bench-pressing four women.

Hall is set to take on Game of Thrones star Hafthor Bjornsson in a boxing match in September with both more known for their strength.

He also topped the world in 2017 with Bjornsson taking his title off him 12 months later following the Brit’s decision to step away.

Though Hall, 32, has proved he still has his strength with a remarkable video posted on social media.

He is seen bench-pressing a bar while two women hold on on each side, with Hall completing numerous reps.

The Beast, as he is known, has slimmed down in recent years while still keeping his ability to lift.

He had posted an image of himself on social media with a picture from 2017 alongside a more recent photo.

In the caption, he explained he had lost 36kg in four years and his body now appears to be a lot more chiselled.

Hall is preparing for his September bout with Bjornsson, and previously said: “I’m training for this fight like I trained to be the strongest man in the world, no stone unturned and anyone in my way is getting milled down.

“With the experience MTK Global [the official boxing advisers to organisers Core Sports] brings to the table, this event will be even better than it was going to be.

“As for the fight itself, I have zero doubt in my mind that cry baby Thor is getting folded in half and sent packing back to Iceland.”

While Bjornsson, who is well known for playing ‘The Mountain’ in Game of Thrones, added: “I’m very excited with MTK Global’s involvement as this is something I’ve been taking very seriously and I want others to know how serious this fight will be.

“I’ve been extremely focused and dedicated in my training as always and I am looking forward to getting in that ring.”