Eddie Hearn’s bold plans to host boxing events in his back garden are taking shape as new pictures reveal the scale of work done ahead of this weekend’s inaugural ‘Fight Camp’.

Matchroom’s headquarters in Brentwood, Essex, where Hearn grew up, has been transformed into a boxing venue ahead of a series of ‘Fight Camps’, starting with Saturday’s domestic bout between Sam Eggington and Ted Cheeseman.

The venue is being used as a ‘bubble’ so that fighters can compete safely amid health and safety concerns regarding the coronavirus pandemic. All athletes will stay at a hotel nearby and travel back and forth between the HQ and accommodation. 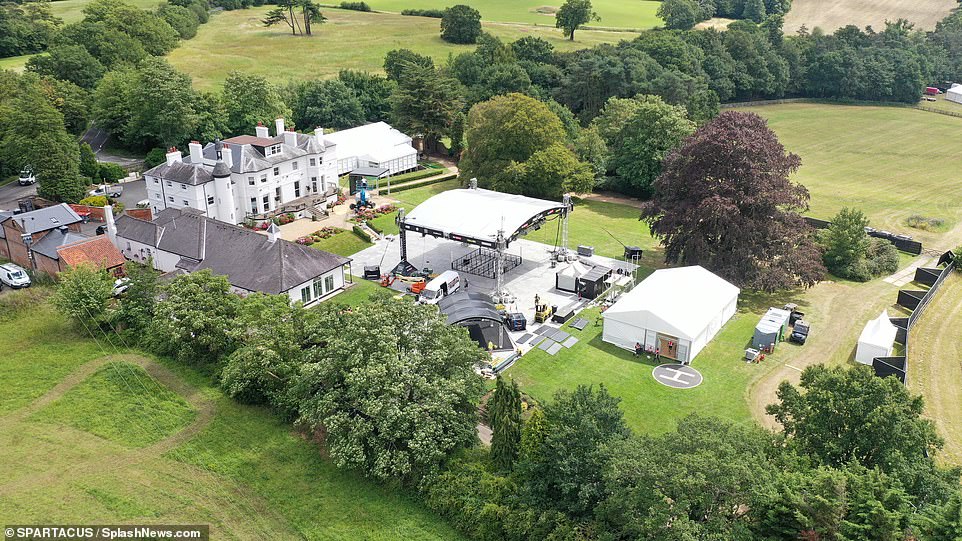 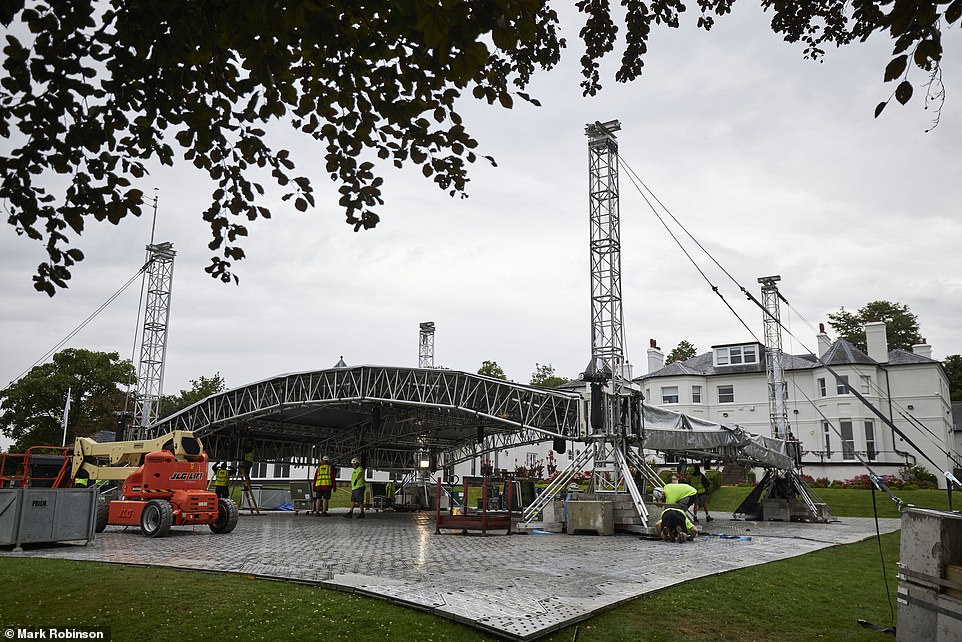 The boxing promotor has decided to use the grounds of his HQ in Brentwood, Essex to host a series of upcoming events 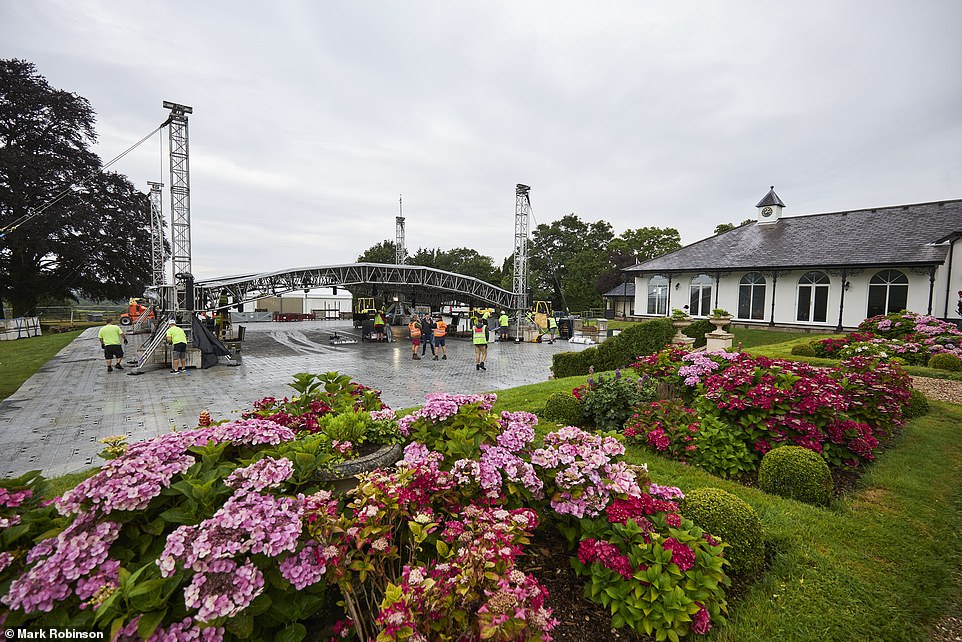 With the backdrop of neatly manicured gardens, scenes of violence and heavy blows can be expected to unfold this weekend 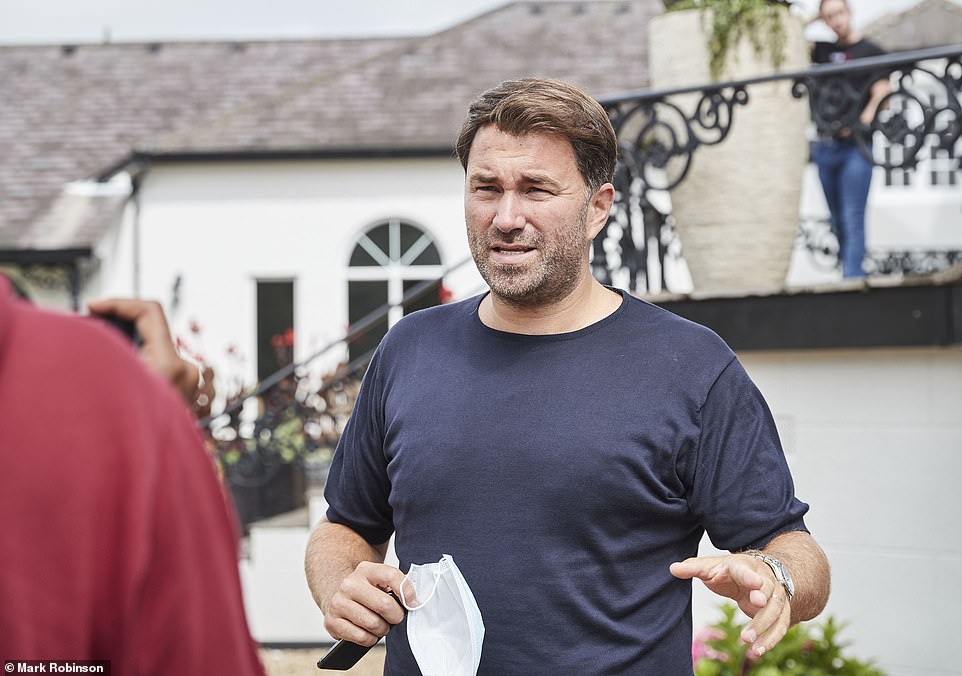 And new photos reveal the scale of Hearn’s plans with construction of the state-of-the-art complex well underway ahead of this weekend’s landmark event.

Flooring has been laid out on the lawn to provide stable grounding for those behind the scenes and television crews working on the night.

A canopy has been constructed to cover the ring, which will be situated in the centre of the grounds, to protect from bad weather – although there is a very low chance of rain on Saturday night.

The manicured gardens provides an unusual backdrop to what will be a night expected to contain knock out blows and heavy doses of violence, but Hearn insists that his Brentwood Garden is the new Madison Square Garden – an iconic venue in New York that has played host to plenty of legendary bouts. 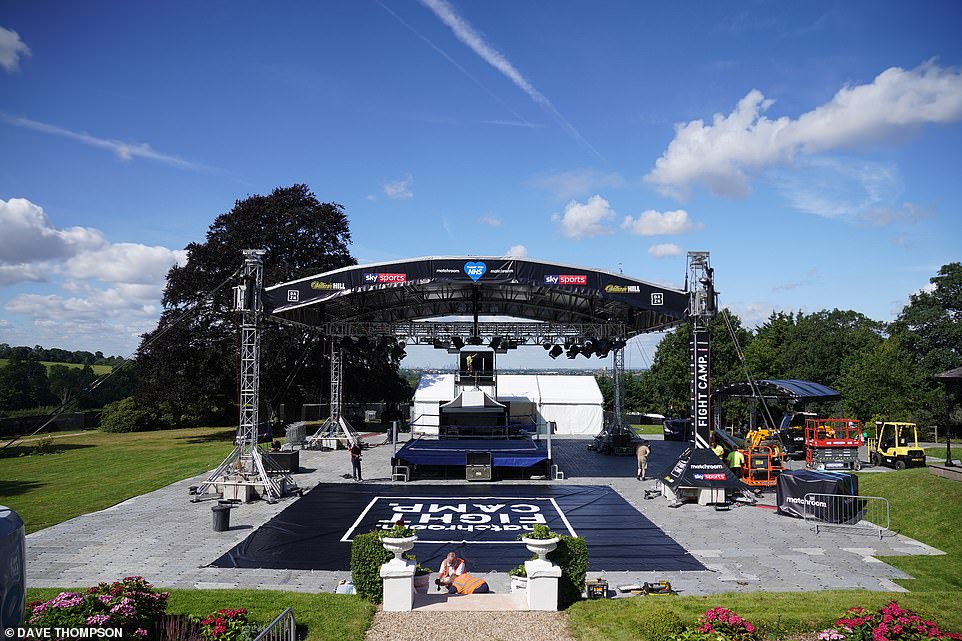 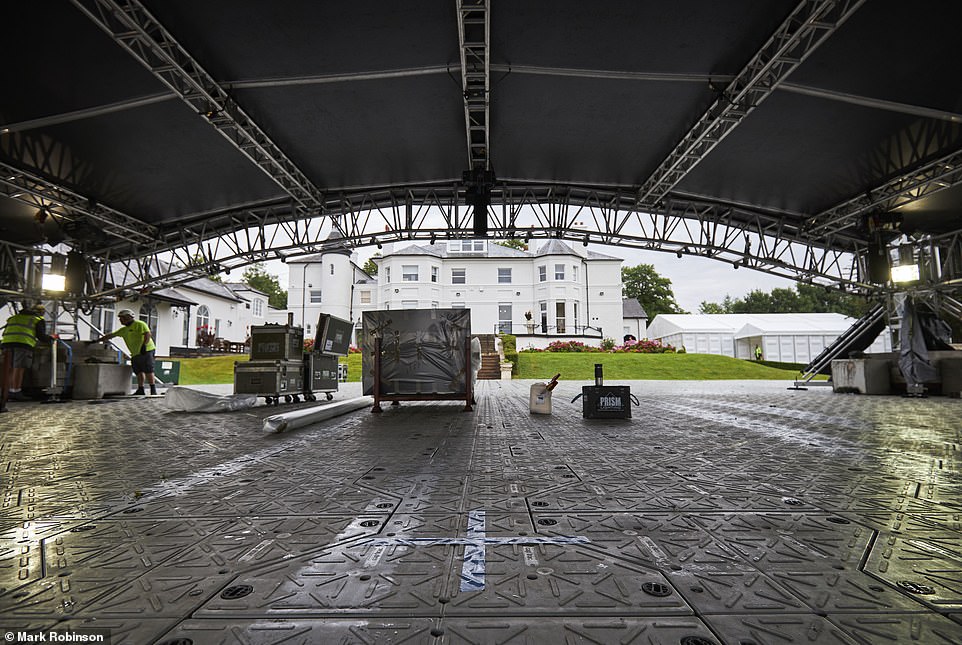 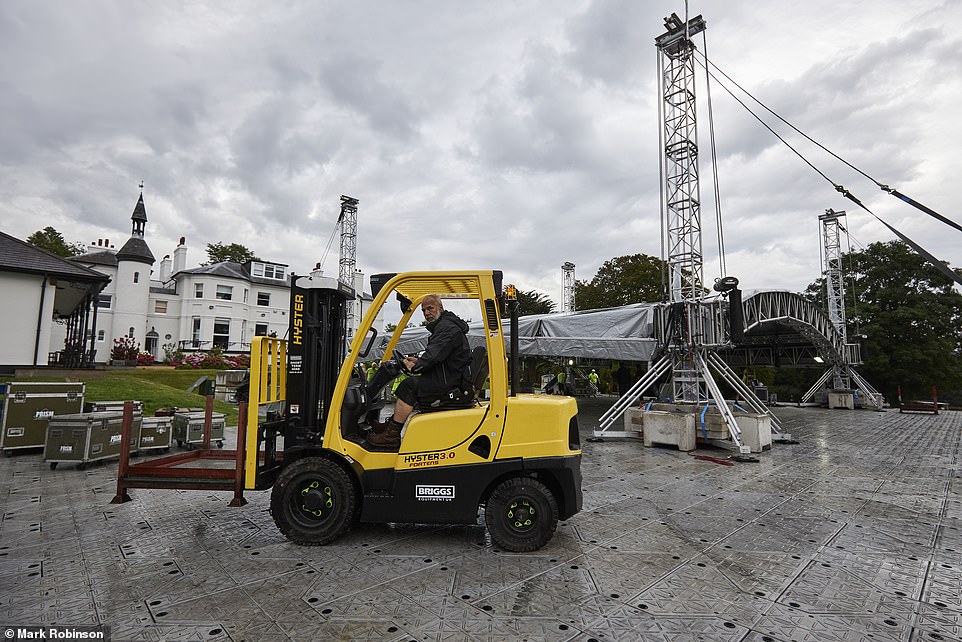 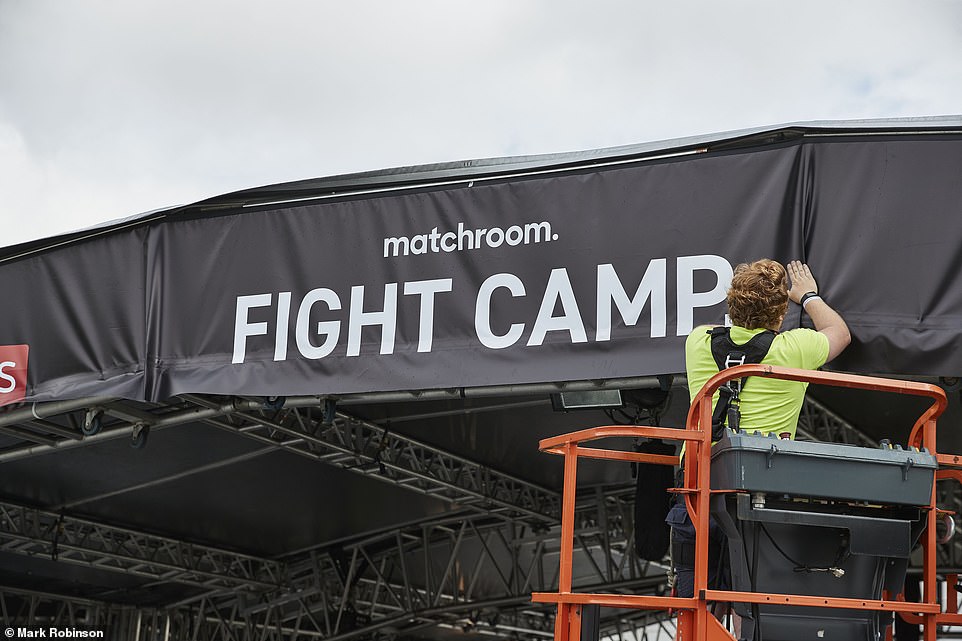 ‘Our project restart is about staging live boxing from the garden there with a canopy. You’ve heard of Madison Square Garden and this is the new garden,’ he told talkSPORT.

‘I just feel like when you are talking about a gladiatorial sport, like boxing, you need to create that moment, that energy, not just for the viewer at home but the fighter as well.’

The 41-year-old has understandably been a busy man, and can be seen whizzing around the property in a golf buggy to ensure his project is on track so that it will come to fruition.

The words ‘Fight Camp’ can be seen emblazoned on the canopy to be held aloft the ring, while a flag bearing the name flies overhead at the headquarters. 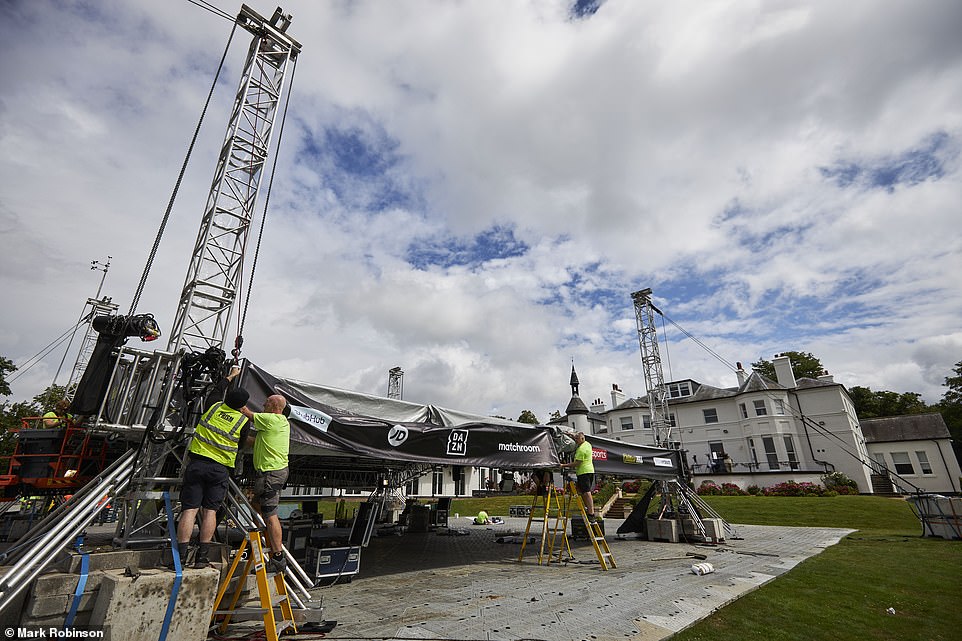 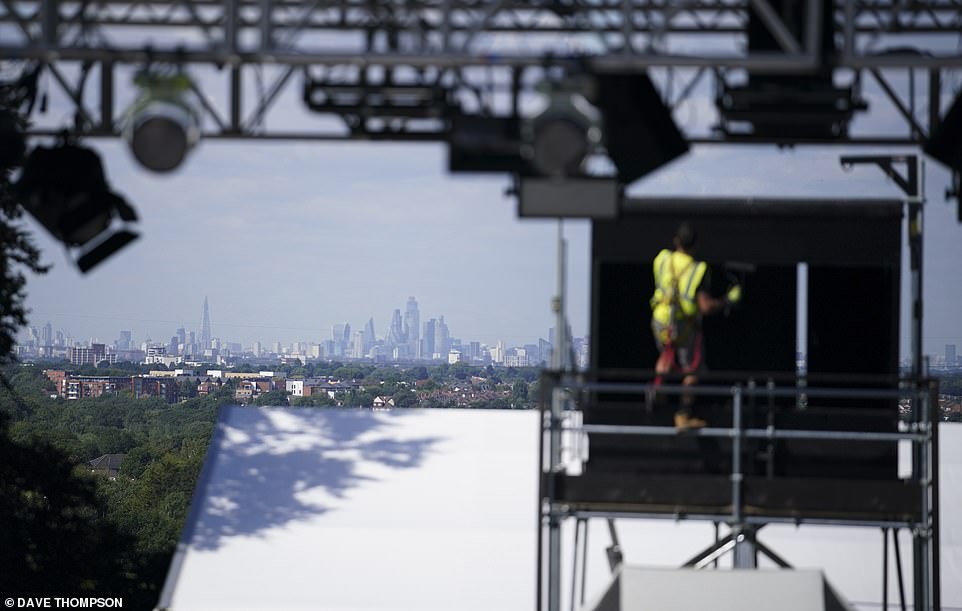 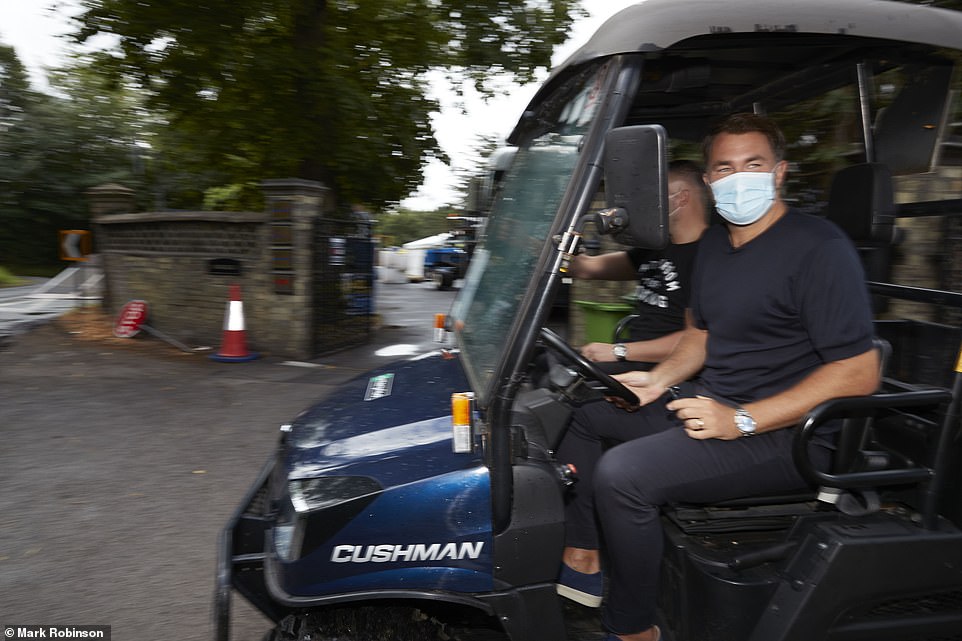 Hearn had been keen to carry on with his shows during the pandemic but quickly realised that it would not be feasible to host his shows while the crisis soared throughout the UK. Hosting fights at Matchroom HQ is seen as the perfect compromise, and big stars such as Dillian Whye and Katie Taylor will compete at the venue later this summer.

Whyte, the WBC mandatory challenger for Tyson Fury’s world title, has been ridiculed by the Gypsy King for agreeing to compete at Fight Camp. With a picture of Eddie Hearn standing in a ring on the Matchroom lawns, Fury wrote: ‘@DillianWhyte next fight venue haha. mr big time himself…’

The Premier League made a hugely successful return in June where players and staff were regularly tested to allow for the season to be completed, while the UFC has hosted four events at ‘Fight Island’ in Abu Dhabi, which have been very well received.

Matchroom Boxing confirmed on Tuesday morning that all fighters competing on Saturday night returned negative test results for coronavirus in a big boost ahead of this weekend’s event. 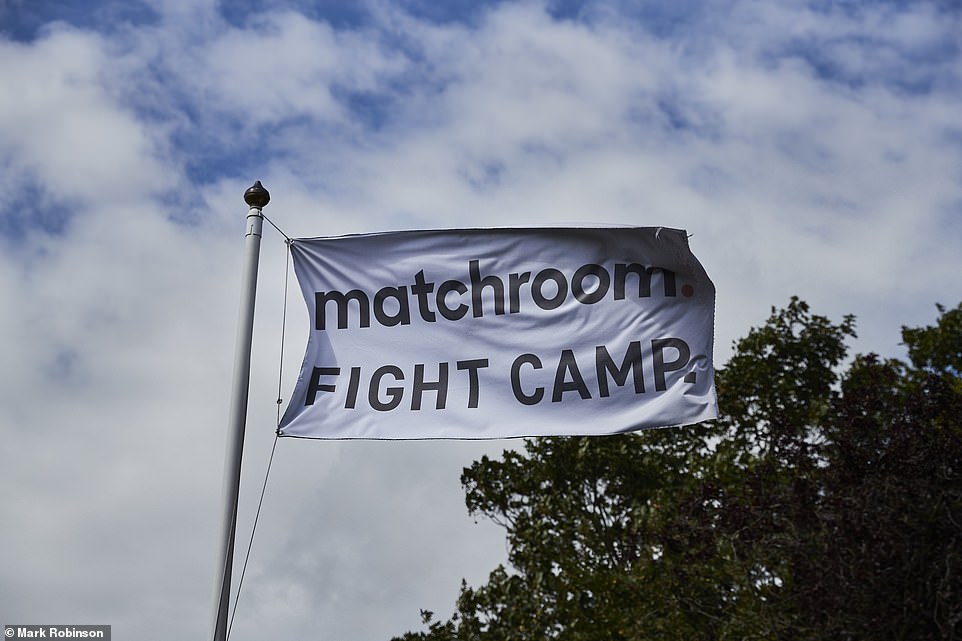