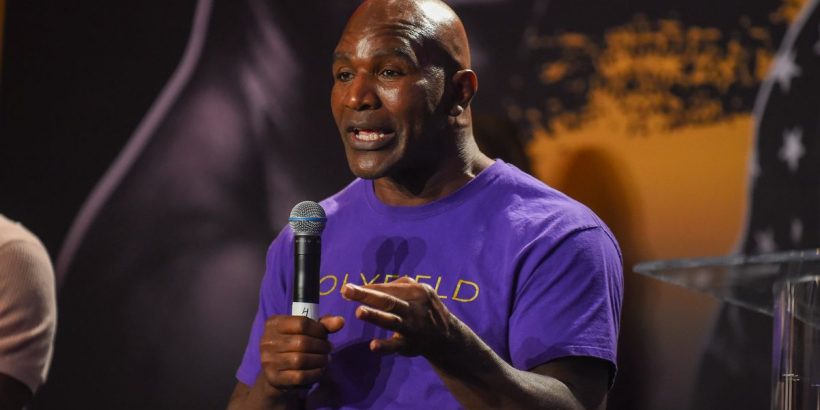 Evander Holyfield struggled to answer questions during a press conference last night as fears continue to grow over the 58-year-old's return to the ring.

Holyfield will take on ex-UFC light heavyweight champion Vitor Belfort in Florida tomorrow but many in the sport are worried for his safety.

The boxing legend stepped in as a late replacement for Oscar De La Hoya after he was hospitalised with coronavirus and forced to pull out of the main event.

But the whole fight card had to be moved from California to Florida due to the Athletic Commission refusing to sanction Holyfield given his age.

And after a public workout that gave many in the boxing world pause, Holyfield looked particularly frail at the pre-fight press conference yesterday, struggling to coherently answer questions from host Ray Flores and members of the media.

And during a conversation with former President Donald Trump, who appeared via satellite to promote his involvement as a commentator on the event, Holyfield forgot where some of his most famous fights had taken place.

He thanked the 45th President for hosting his fight with George Foreman in Atlantic City, but needed to be guided in the right direction by Flores.

Holyfield claimed that he has been training for a comeback for two years, after initially signing up to take on Kevin McBride in an exhibition bout.

The Irish boxer famously retired Mike Tyson when the pair fought in 2005, and both he and Holyfield felt that a win over the other would help to entice Tyson into a rematch.

Fans have been notably concerned after a video emerged on social media of Holyfield's work out which fans labelled him looking "far from sharp".

Will you be tuning in to watch Evander Holyfield tomorrow night? Let us know in the comments!

"This is going to end horribly," another wrote.

While one fan appeared to defend Holyfield: "But he isn't looking sharper than ever, he just doesn't look terrible."

Holyfield's return is his first fight in a decade, after retiring in 2012 following an effort to earn a world title shot.

And he stayed ready despite the McBride fight being moved from June to August before finally agreeing to a late-notice bout with Belfort.

“When Oscar De La Hoya came down with Covid they asked me to fight Vitor Belfort," Holyfield said. "Training is what I do, like I tell the young people if you do things right, it will work out for you, that works for older folks too.

“Boxing is a game and I know how to prepare for it against Vitor Belfort. I’m sure if I was getting in his game, I’d be in trouble but he’s getting into my game so he’s in trouble.

“I’ve been training for over two years because there were fights mentioned against other fighters.

"I realise now as I prepare to face Belfort I’m in good shape and I don’t get out of shape.”