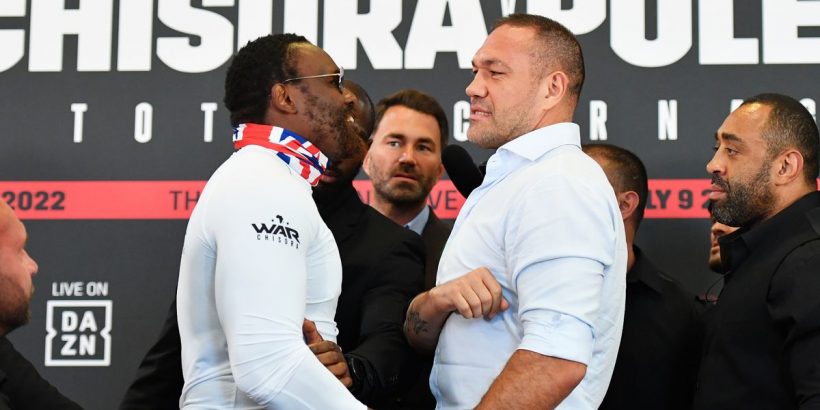 Boxing fans spotted Eddie Hearn "s****ing himself" during the tasty face-off between Derek Chisora and Kubrat Pulev on Thursday.

The heavyweight duo are set to meet at the O2 Arena on Saturday night in a highly-anticipated rematch six years on from their first meeting back in 2016. Ahead of the bout, a press conference was held two days before the fight including the main event and fighters from the undercard, concluding with a face-off between Chisora and Pulev.

Pulev appeared relaxed at first as he smiled to the cameras as Chisora attempted to get in his face, before the pair exchanged words on stage.

READ MORE: Derek Chisora was put on six-week sex ban by fellow pro so he was "fully loaded"

Tempers appeared on the verge of boiling over, though, after Chisora and Pulev shook hands, with security storming the stage to separate the fighters.

Throughout the face-off, Matchroom Boxing chief Hearn can be seen lurking in the background, looking on sheepishly as the two fighters tried to get under each other's skin.

Boxing fans were quick to mock Hearn after footage of the incident was posted to social media, with one writing: "Hahaha brilliant @eddiehearn has his game face on there as that face off progressed."

Who will win the rematch between Derek Chisora and Kubrat Pulev? Let us know in the comments section below.

Another added: "Eddie absolutely s****ing his pants up there, think he'd rather it was Ebanie Bridges facing off with someone." IBF bantamweight champion Bridges is known for attending weigh-ins and face-offs in lingerie.

A third fan also commented: "@eddiehearn his face was a picture of worry there!!" Meanwhile, another wrote: "Eddie looked a little nervous. Considering stepping between for 0.1 second and thought… nahhhh."

Chisora and Pulev previously fought back in May 2016 when they clashed at the Barclaycard Arena in Hamburg for the EBU European heavyweight title.

It was Pulev that emerged victorious that night, winning via a split decision to hand Chisora the sixth defeat of his professional career.

In the six years since, Pulev has only lost once, to Anthony Joshua in 2020, meanwhile Chisora has been beaten a further six times to leave him with a record of 32-12 heading into this weekend's rematch.