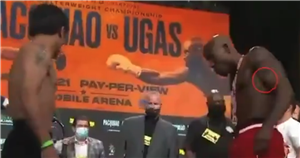 Manny Pacquiao's opponent Yordenis Ugas appeared to struggle with an injury during the weigh in.

The legendary fighter is set to take on Ugas for his WBA (Super) welterweight title on Saturday night, in what will be his first fight in two years.

Ahead of the big fight the Cuban stepped on to the scales and one fan seemed to notice his arm was swollen around the bicep area and he looked in some discomfort.

"He is in clear discomfort as you see in the clip; this fight [is] not going 12 [rounds], [he] will call it quits in between," one noted.

Another said: "It’s such a shame as it’s a good fight if Ugas was fit but bicep injury means I doubt it’ll be particularly competitive." Ugas weighed in on the 147lb welterweight limit for tonight's fight while Pacquiao was one pound lighter.

"I’m not taking this fight lightly," the Filipino said. "Of course, I don’t want to be overconfident for this fight. I want to make sure I get the victory."

Ugas added: "I have a lot of respect for him so I’m very excited. I have the belt. Whoever wins tomorrow gets the belt, but right now I’m the champion, and I’m ready."

Pacquiao was due to face the unifiedwelterweight world champion Errol Spence Jr, but he was forced to withdraw following a retinal tear to his left eye.

Speaking on his injury this week, Pacquiao said: “I’m praying for a fast recovery from Errol Spence Jr. and that he can fight again soon," he said this week. "I of course felt bad when I first heard the news, but it’s a good thing that Ugas was ready to challenge me for the world title.

"I’m glad that we can settle that dispute about the WBA title. It’s always better to talk in the ring.”

He added: “It only took me two days to adjust to fighting Ugas. I have fought a lot of right handed fighters before. It would have been harder switching from preparing for a right hander to a southpaw.

"Most of my opponents have been right-handed, so there’s nothing to worry about."

Manny Pacquiao 's trainer Freddie Roach is calling for Floyd Mayweather Jr to come out of retirement so that 'PacMan' can get a chance at revenge.

The Filipino fighter was defeated by 'Money' over 12 rounds via unanimous decision in 2015 but feels the time is right for a rematch.

"We would like to fight Mayweather one more time," Roach told Sky Sports .

No. Manny is not into that. Manny has boxing fans. That's what we're after."