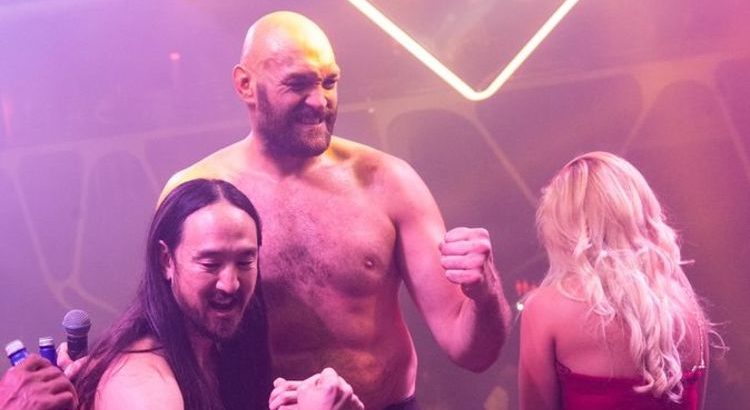 Tyson Fury celebrated his thrilling victory over Deontay Wilder by taking to the microphone at a top Las Vegas nightclub in the early hours of Sunday morning. Fury delivered an 11th-round knockout to defend his WBC heavyweight crown in the latest chapter of his trilogy with Wilder.

The 33-year-old extended his undefeated professional record after 32 fights despite being knocked to the ground twice by his bitter rival.

Momentum in the fight swung after the seventh round, with Wilder just about hanging on.

Fury knocked down the 32-year-old in the 10th round before delivering the final blow in the 11th.

And Fury celebrated in sensational fashion.

The Manchester-born star was pictured topless at Hakkasan Nightclub, Las Vegas, in the early hours of Sunday morning.

Fans were excited to see Fury arrive at the event just after 1.30AM.

Fury climbed up to the microphone and belted out several classic hits, including Neil Diamond’s Sweet Caroline.

He also performed victory dances along to Don McLean’s American Pie and AC/DC’s You Shook Me All Night Long.

Fury has said that his victory over Wilder places him at the top of the list of all-time heavyweight greats, including Muhammad Ali and Mike Tyson.

“I can only beat whoever’s in my era and I’ve done that all my life,” Fury said after the fight.

“I can only be the best of my day and I’ve done that. I’m the greatest heavyweight of my era, without a doubt.

“There’s a long, long line of [great champions] and they go right back to John L Sullivan, Jack Dempsey, Mike Tyson, Lennox Lewis, Muhammad Ali, George Foreman, Ken Norton, Joe Frazier, the Klitschko brothers, even the guys from today like Anthony Joshua and Oleksandr Usyk and everybody else.

“They’re all good champions, but without sounding too sharp and clever, I’d place myself right on top of the pile.

“I believe that I could beat anyone in history. Any man born, I believe I’ve got a really good chance of beating him.”

He continued: “It was just a great fight all in all. That’s what I’m here for.

“I wasn’t here to blow someone over in one round.

“I travelled the world for so many years to find challengers and he gave me a really worthy challenge tonight for sure.”
Source: Read Full Article