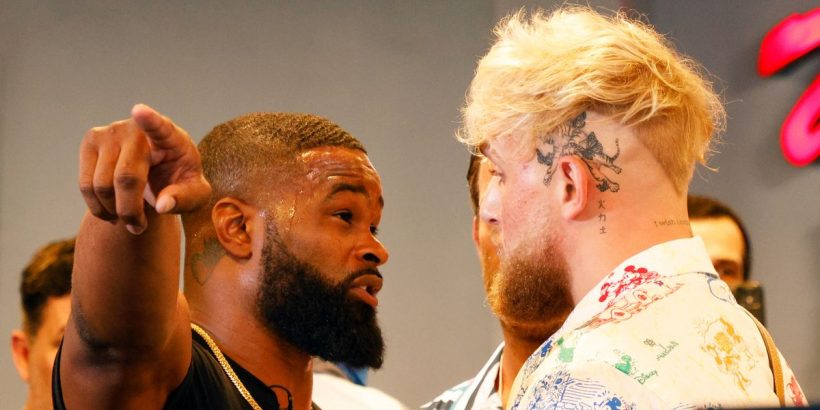 Jake Paul has accused Tyron Woodley of wearing heels during the face-off to promote their fight.

Paul will take on the former UFC world champion on August 28 in what will be his fourth professional boxing fight.

Woodley will be making his ring debut following his release by the UFC – and came face-to-face with Paul in Miami last week.

The pair traded verbal jabs at the famous Fifth Street Gym before facing off again during a promotional shoot.

And Paul claims to have noticed a size difference between the two meetings.

"I think he was wearing lifts in his shoes for the public face-off," he told brother Logan's Impaulsive podcast. "Because when we faced off for the second time he's a much, much shorter guy.

"We're about the same weight, he's thicc, beefy, we're both going to be cutting down to 190lbs."

Paul also claimed, as he would, that Woodley showed signs of fear during their second coming together.

"We did a little face off while we were doing a photoshoot for the assets for the poster," he added.

"No one was there besides our teams, no media, it wasn't for the public to see, and I saw a different Tyron than I saw in the public face-off.

"I saw a Tyron who looked me in my eyes and saw with my shirt off and he just looked at me and he knew his destiny, he knew the big right hand was going to crack him in the skull and knock him out.

He then knocked out former NBA player Nate Robinson before following up with another stoppage win, this time against former UFC welterweight Ben Askren.

Woodley reigned as the UFC's 170lb champion from 2016 to 2019 when a defeat by current ruler Kamaru Usman set in motion a four-fight losing streak.

Woodley was released from the promotion following his first-round submission defeat by Vicente Luque in March.

And during his face-off with Paul, Woodley promised: "I was knocking people out on the street when you were on Disney, now I'm going to do it professionally and get paid for that – where's the speed bags in this gym because that's all this guy is.

"You know what's going to be embarrassing? When you're laying on the ground and I'm standing over you chanting 'I beat yo' a**'.