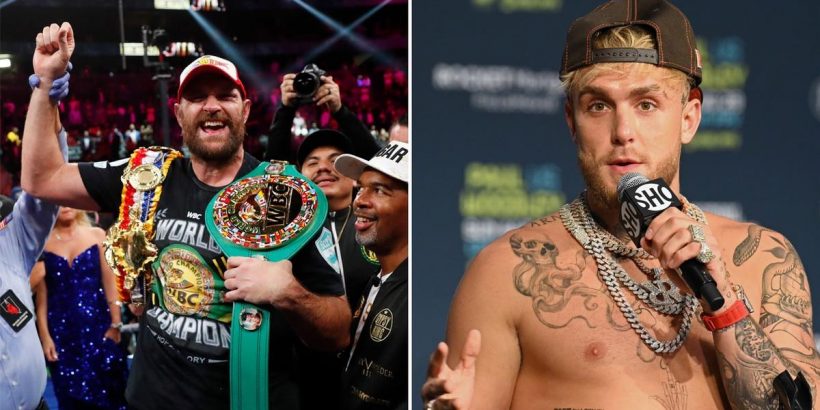 Jake Paul has challenged Tyson Fury to meet him in the ring after his scintillating victory over Deontay Wilder.

The 'Gypsy King' emphasised his status as the leading heavyweight with another explosive stoppage of Wilder in Las Vegas.

But he was made to work hard, having been forced to get up from two heavy knockdowns in an early scare.

And now YouTube star Paul has offered the heavyweight king to share the ring, after his heroic exploits in America.

"I think Tyson Fury might have finally earned the chance to fight me," Paul posted on Twitter after the fight.

The 33-year-old produced a remarkable display to beat his bitter rival again, after an extremely disrupted build-up.

He was forced to delay the fight initially with coronavirus, and the illness of his baby daughter Athena.

But his delays were no hindrance to his performance, as he dropped his opponent in the third round.

This was met with a huge response from Wilder, who immediately fired back with two hammering blows which left Fury behind at the midway point.

But he rallied in the tenth after out-landing his opponent with another knockdown that led to his breakthrough.

Will Fury become undisputed champion in his career? Let us know your thoughts in the c omments section below.

And a booming right hand, sent Wilder immovable on to the canvas and the referee raised Fury's hand in glory once again.

Fury will continue to be considered the toughest test in the heavyweight division, and will no doubt face a long list of waiting challengers.

But for now he will celebrate his latest American quest that ended in world glory again, and has reflected on his performance.

"I give him the glory for the victory. He’s a tough man," Fury said post-fight. "He took some big shots tonight. It was a great fight, as good as any trilogy in history.

"I beat him three times and I’m a sportsman and wanted to give him some love and respect. And he didn’t want to give it back. That's his problem and I pray for him. This was a great fight and October 9, 2021 will go down in history, I hope.

"I always said I was the best in the world and he was the second best. Don’t ever doubt me. When the chips are down, I will always deliver.

"And I want to say if it wasn’t for Sugar (Hill), America's and Detroit's own, I wouldn’t have gotten through that fight tonight… He told me, he said get your jab working, big guy, and throw that right hand down the middle. That's how the big dogs do it.

The feud continued at the final bell, with Fury critical of Wilder's "lack of respect" after he suffered a second consecutive defeat.

And this prompted a bitter reaction from Wilder, who was evidently still hurt by the dramatic nature of the encounter.

Fury will now be challenged by British rival Dillian Whyte if he can navigate beyond tough operator Otto Wallin.

Meanwhile Wilder faced a trip to the hospital, to ensure his health was in good shape after a brutal stoppage overnight.