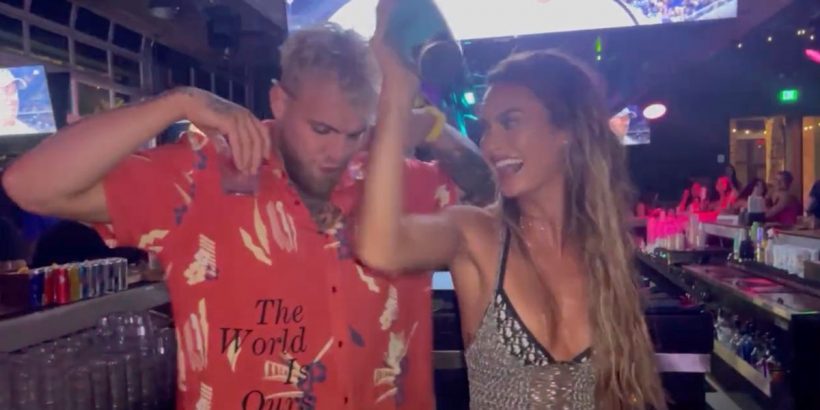 If Jake Paul is treating a potential boxing match with KSI seriously, his partying antics on social media suggest otherwise.

The American is currently without an opponent after Saturday's bout against Hasim Rahman Jr. was cancelled at only a week's notice. That's led to the former Disney actor calling out KSI as a possible replacement for fellow YouTuber Alex Wassabi, who is said to have pulled out of their clash.

Paul, 25, posted a video message taunting KSI amid reports Wassabi is out of their duel due to injury. To sweeten the deal, he agreed to weigh in at 180 pounds and keep the current fight date of August 27 in London.

In a new post recorded from behind a packed-out bar, Paul can be seen with drink in hand, flexing and dancing awkwardly while girlfriend Julia Rose attempts to pour a cocktail. The caption reads: "I've been raging 24/7 for the past 6 days… but KSI is still scared of me."

But KSI was quick to counter in a string of tweets, accusing Paul's company, Most Valuable Promotions (MVP), of being "so untrustworthy" and inflating their viewership figures "by like 50 times." The 29-year-old added he and his entourage "anticipated [Paul would] pull something like this" and contracted another fighter in case Wassabi withdrew.

"Please reveal that 'fighter' you contracted," tweeted Paul in response. "I’m sure that 'fighter' is very experienced. He beat your brother’s a*s too? I will pay that fighters (sic) purse to (sic)."

Do you think KSI could end Jake Paul's unbeaten boxing streak? Let us know in the comments section.

KSI said he intended to 'honour his word' by putting on an event as planned. It's yet to be announced whom he will face if Wassabi withdraws as reported, though KSI asserted "MVP won’t have a thing to do with it."

The YouTube personality hasn't fought competitively since he defeated Paul's older brother, Logan, via decision in November 2019. The younger Paul sibling has a professional record of 5-0, meanwhile, having defeated former UFC fighters Tyron Woodley (twice) and Ben Askren along the way.

Predicting a bout in future, KSI signed off saying: "We will fight on my terms and when we do, it’ll be done on the biggest stage. I’m talking Wembley stadium fam. With a full camp tailored just for you and I, so that there are no excuses when we fight. None of this short notice s**t."