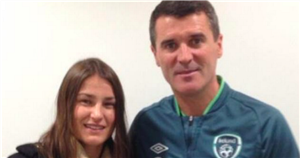 Katie Taylor has enjoyed remarkable success in a boxing ring.

The Irish icon is one of the most decorated boxers in the history of the sport and a global star – but she has also had setbacks.

The lowest point of her career came at the Rio 2016 Olympics when she was defeated in the quarter-finals and was unable to defend her gold medal.

In the wake of that painful defeat, Taylor was lifted up from an unlikely source – Manchester United legend Roy Keane.

Keane was known for his reputation as a hard man on the pitch and his hard-nosed approach off it when he became a coach.

Yet he showed his softer side with a classy gesture to Taylor during her darkest days as he picked up the phone to his Irish compatriot to lend some words of encouragement.

It was a welcome message which helped Taylor get back on track and recover to revolutionise women’s boxing in the professional ranks.

“When I lost in the Rio Olympics, the first phone call I got was actually from Roy Keane,” Taylor told the Daily Mail in an interview in 2019.

“He said, ‘keep your head up’. And he was very, very positive and that really does make my heart so happy.

“He went out of his way, and it meant so much to me that one of my heroes, someone who I really looked up to as a child, gave me a call at the lowest point of my career.

“They’re the things you don’t see. He has a great heart. And he’s someone who doesn’t look for any limelight for those sorts of things. It was just out of the goodness of his heart.”

Keane’s words certainly seemed to work, with Taylor now 17-0 as a professional and plotting another huge win as she takes on Jonas.

Taylor knocked Jonas out of the London Olympics in a thriller en route to gold, with the ex-Team GB star now looking to upset her Irish rival and take the belts by inflicting a first professional defeat.