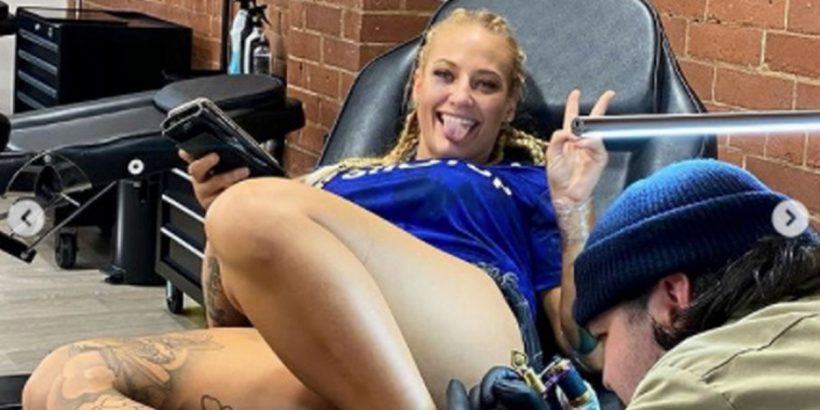 The ‘Blonde Bomber’ made headlines earlier this year when she arrived at the weigh-in for her WBA bantamweight title fight against Shannon Courtenay wearing lacey lingerie.

The Australian is a huge Leeds United fan and she took to social media to celebrate her seventh professional win of her career.

Despite suffering a hand injury during the fight, Bridges defeated Mailys Gangloff of France via decision, the fourth such win of her career to go with three knockouts.

“Thank you Leeds. What an experience,” the 34-year-old wrote on Instagram. “Thank you for all the love and reception last night.

“Got the win last night and like usual having to fight through adversity.

“Busted right hand from the 2nd that just got worse and worse. But it wouldn’t be a Blonde Bomber fight without some drama/injury right?”

Bridges then posted a photo of a new tattoo on her wrist, the White Rose of York, which she got as ‘a little memento’ of her time spent in Leeds.

She also posted photos of two new smaller tattoos as she got a diamond inked on each ankle.

Do you think Ebanie Bridges can be world champion? Let us know in the comments section.

Bridges now has a record of 7-1 and is on a two-fight winning streak.

She lost to Courtenay in April via unanimous decision when the two clashed in London for the vacant bantamweight title.

During her win over Gangloff last weekend, fans were confused by Bridges’ performance as she appeared to pull punches in the later rounds – despite it being a fight where she needed a crucial statement victory to attract attention for a future title fight.

Bridges was awarded the victory in a close contest after surrendering the last few rounds to her opponent.

Her impressive effort earned the win to the cheers of the partisan Leeds crowd.

The 'Blonde Bomber' rallied local support by attending the weigh-in while wearing her trademark lingerie donned in the colours of Leeds United.

She also carried a Leeds scarf as she did her ring walk, and Bridges' appreciation for her own reception by the local crowd has now been permanently immortalised on her body.