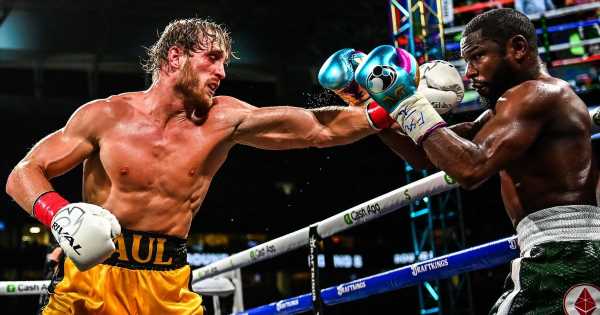 Logan Paul has said that he would be able to beat Mike Tyson after going the distance with Floyd Mayweather in his last fight.

The YouTube star went eight rounds with Mayweather in their exhibition bout earlier this month, and due to the rules of the contest, no winner was officially decided, meaning he didn't lose to the legendary boxer.

And on an episode of his podcast Impaulsive, Paul told his younger brother Jake and fellow co-host Maclin Bilski that he believes he could be a good opponent for Mike Tyson in another big money exhibition bout.

The former heavyweight champion was one of the most feared fighters of all time during his time on top in the 80s and 90s, and recently returned to the ring for a bout with Roy Jones Jr last year.

And despite the pair apparently being friendly, with 'Iron Mike' calling Paul to congratulate him on his performance against Mayweather, it seems the influencer fancies a fight with the heavyweight great.

"Someone mentioned Mike Tyson, like how funny is it?" Paul said during a recent episode of his podcast. "One great at a time. Or is it like you can only fight one?

"My lawyer mentioned it and he was like, 'No, Tyson will rip your head off, you don't stand a chance'.

"I'm like bro, I literally just went through all of this, you can't tell me I can't beat Mike Tyson. Bro, he's old, old."

Despite having told Paul he would be brutalised by Mayweather, Tyson changed his tune in a facetime call with the YouTube star recorded by ESNews on YouTube recently, where he excitedly heaped praise on the 26-year-old.

"You kicked his a**." Tyson said in the recorded phone call. "You're bad, I was wrong!

"You went eight rounds with the greatest of all times, I was telling people they don't want to try that s***. You got him with those punches."

Paul admitted that Mayweather was 'quick' on the call, before handing the phone over to his mother Pam Stepnick, who grew up watching Tyson's legendary heavyweight title run.

The Paul brothers are currently in Dorado, Puerto Rico where they are preparing for Jake's upcoming fourth professional bout with former UFC champion Tyrin Woodley on August 28.

The elder brother didn't spend much time celebrating his moral victory against Mayweather in Miami, instead opting to return to training in his secluded Puerto Rican base camp.

They are joined by Jake's head coach BJ Flores, who was a former world title contender at cruiserweight and heavyweight, including a fight with Tony Bellew.

Jake is a slight favourite against Woodley, who was welterweight champ in the UFC for a number of years, making four defences against the likes of Darren Till and Stephen Thompson.