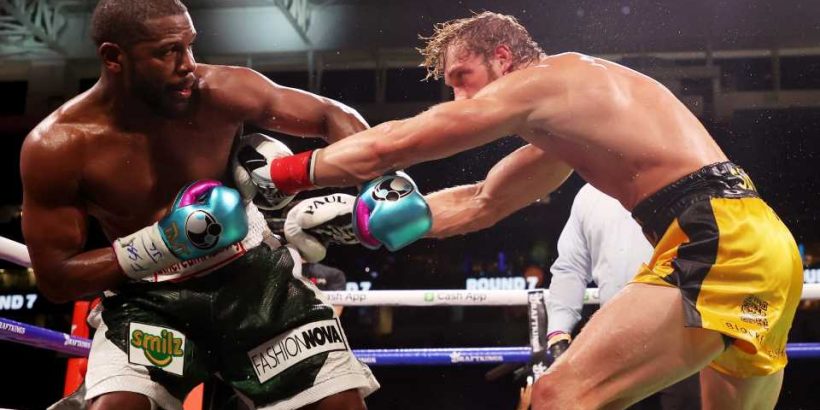 Put away the tinfoil hats.

On Sunday, Logan Paul and Floyd Mayweather fought to the end of eight rounds in an exhibition bout that pitted YouTube star and boxing great in a truly “What the hell is going on?” moment in 2021.

Without any judges, the fight went without a winner, though Mayweather “won” the matchup handily, landing more and cleaner punches throughout. One Mayweather counterpunch in particular seemed to have hobbled Paul, but a Paul clinch (with some seeming help from Mayweather) held him on his feet.

The video of the stunned Paul had some believing that maybe Mayweather got the better of thie bigger fighter in the ring, “accidentally” knocking him out but holding him up to help the fight go the distance and give the people their money’s worth.

Paul took to Instagram to air his grievances on the conspiracy and pat himself on the back:

“I’m seeing this narrative going around that there’s one part in the fight when Floyd punched me and I kind of leaned on him a little bit and it looks like I kind of went limp,” Paul said (via Yahoo Sports). “And people are trying to spin it and say that he knocked me out and caught me and kept me up to keep the fight going to the eighth round, stop trying to discredit what happened last night. …

“Make no mistake, he got a lot of good punches in. There’s a couple of photos, I didn’t know my face could make that shape. But never rocked, never blacked out, never obviously got knocked out. He didn’t hold me up. He tried to take me out and he couldn’t. It was great.”

Novelty exhibition bouts are a staple of boxing, so the latest forays into the ring by Paul and his brother Jake aren’t entirely new. Both Paul brothers are infamous internet stars by trade, so consider the fact that Logan Paul made it eight rounds with one of the greatest fighters of all time a small bit of an accomplishment.

Regardless of the outcome, one old boxing adage remains true. People pay for fights to see one of two things: Fighters deliver greatness, or fighters get knocked out. Luckily for Paul, he hasn’t been on the receiving end of that second part just yet.