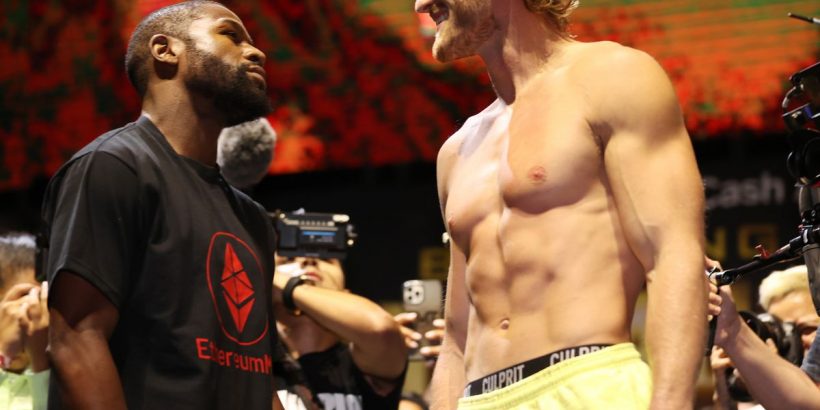 Floyd Mayweather returns to the squared circle tonight when he takes on YouTube star Logan Paul in an exhibition bout.

The ring legend amassed a perfect 50-0 record as a professional and bowed out following his win over UFC star Conor McGregor in 2018.

But he has since realised he can earn millions taking part in exhibition bouts and knocked out Japanese kickboxer Tenshin Nasakawa in the first round.

Social media star Paul brings far less fighting experience to the table but will enjoy a height and weight advantage in Miami tonight.

He has fought just once as a 'professional', losing to fellow YouTuber KSI in their rematch in 2019.

But Paul is confident he can upset the odds and be the first fighter to stop Mayweather during his glittering career.

Here, we run through the rules for this intriguing clash…

Logan Paul and Floyd Mayweather are scheduled to clash over eight three-minute rounds, akin to a mid-level professional bout.

This is a big change from Mayweather's exhibition against Nasakawa in Japan when the pair were scheduled to fight for just three three-minute sessions – not that the American needed that long.

And when Mike Tyson returned to the ring against Roy Jones Jr last November, the legends squared off for eight two-minute rounds.

Paul's previous bout with KSI went the full six scheduled rounds and so his endurance will be tested tonight – if he makes it that far.

And of course, there is a big difference between facing a social media rival and one of the greatest to ever lace up a pair of gloves.

There will be no ringside judges at the Hard Rock Stadium in Miami tonight – and therefore no official winner if the bout goes the eight-round distance.

Most fans believe judges would not be needed in any event – if Mayweather takes the bout seriously.

The five-weight world champion may be giving away a significant height and weight advantage to Paul, but his skill level. should allow him to stop the YouTube star if he so desires.

There was a similar set-up for Tyson's return against Jones Jr before the WBC sanctioning body intervened to set up a three-man panel of judges to score the bout.

In the end, the three presented wildly different cards which conveniently scored the bout a draw – so maybe the lack of judges tonight is no bad thing.

There may not be an official winner of tonight's bout but knockouts WILL be permitted.

And let's be honest, if Paul is laid out by Mayweather at any stage, which seems the most likely outcome, there will be no doubting who the victor is.

The referee will also be permitted to step in and stop the fight should either fighter (probably Paul) be deemed unable to continue.

And both men have, of course, promised a knockout victory with Paul boldly saying: "I think I’m going to go in there and decapitate him in the first round, and if it doesn’t happen, we’re going for the second, and then the third and the fourth."

"Who knows it could go the distance, but it's going to be a f**king show regardless."

It wouldn't be a boxing 'fight' without a pretend row over the gloves.

Mayweather and Paul were due to wear 12oz mitts for their exhibition bout but they both agreed to instead wear 10oz ones.

That is far more similar to the 8oz gloves Mayweather wore during the prime years of his career.

And he insisted he was ready to wear even lighter gloves, which would increase the chances of the fight ending by knockout.

“First they were talking about 16oz gloves, then they talked about 14oz gloves, then it was 12-ounce gloves," he said. "Now, as of today, we’re fighting in 10oz gloves. We’re getting closer and closer to what I want.

"What I really want is 8oz gloves, so we can entertain the people. Even though it’s an exhibition, they want to see blood."