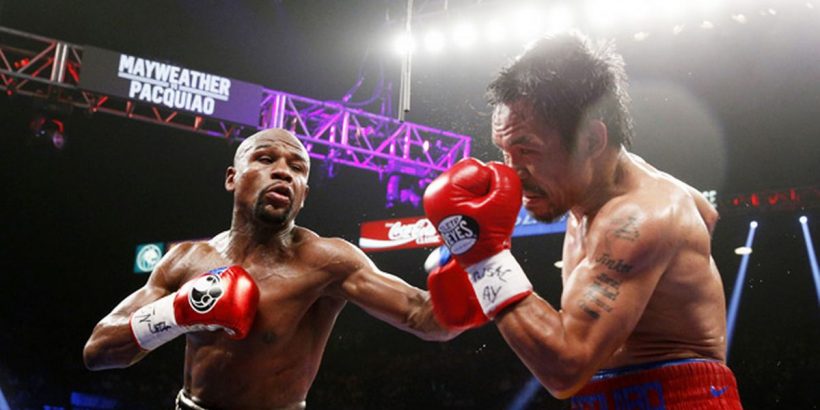 Manny Pacquiao has taken a shot at Floyd Mayweather for his tactics in their 2015 super fight, which saw Mayweather win by unanimous decision.

After years of ongoing negotiations, Pacquiao and Mayweather fought at the MGM Grand Arena in May 2015. The fight, which fell short of its massive hype, broke PPV records in the US selling 4.6 million buys.

Mayweather outboxed Pacquiao to win by unanimous decision, but many critiscsed him for being unwilling to engage in any action with Pacquiao.

"Yeah I'm happy, I'm glad that he [Casimero] retained his belt. But the thing is, his opponent [Rigondeaux] didn't want to fight him. It was like Manny Pacquiao vs [Floyd] Mayweather," Pacquiao told Little Giant Boxing.

After his fight with Pacquiao, Mayweather would pick up wins against Andre Berto and UFC star Conor McGregor to retire from boxing with a flawless record of 50-0.

Pacquiao will fight the former Olympic bronze medalist Yordenis Ugas this weekend after the Filipino's original opponent Errol Spence was forced to withdraw last week due to a torn retina.

And on the fight, Pacquiao says he can't underestimate the Cuban: "He's good. We cannot underestimate him. We have to make sure that we are ready and in 100% condition for the fight.

"I don't have a prediction, but I will do my best to give my fans satisfaction for this fight and get the belt back."

'Pacman' will hope to win the WBA super welterweight title against Ugas. It's the same belt the Pacquiao won against Keith Thurman in 2019 that made him the oldest welterweight world champion in history at the age of 40.

After 71 professional fights, his bout with Ugas could be Pacquiao's last. Given this he is hoping to put on a great performance for his fans.

“Everything is at stake as this might be my last fight. I might as well finish the race with a spectacular performance," Pacquiao said.

World renowned boxing trainer Freddie Roach says that Pacquiao is in great shape ahead of the fight with Ugas. He also thinks that Pacquiao trains the hardest out of any fighter he has ever coached.

"After his first day working out at Wild Card – a two and a half hour session – he lifted his shirt and showed me his six-pack and said, I’m still here, Freddie. He is the hardest working athlete I have ever trained.”

“He does have God-given assets, but even still, you cannot take those assets for granted and Manny certainly doesn’t. Manny has worked hard his whole life. He is a fighter inside and outside the ring. He is never out of shape."