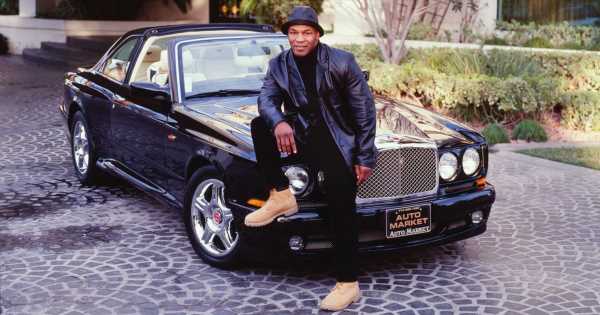 Mike Tyson rose from the bottom to reach the top of the boxing world, and he had to do similar having filed for bankruptcy in 2003.

Former heavyweight world champion Tyson had an astonishing estimated worth of £320m when his lavish spending caught up with him.

Tyson had a debt of around £18m at one point but is now back in the black and managed to rebuild his wealth.

Tyson’s money seemingly went on anything and everything during the heyday of his boxing career.

In the Nineties he was one of the most well-known faces in the world and he liked to travel in luxury too.

The Richest claim that Tyson spent more than £3.5m on his luxury car collection, which included a rare Lamborghini LM002 as well as a Cadillac Escalade and Hummer H2.

It wasn’t just on cars where Tyson went big, with Iron Mike often throwing lavish parties for plenty of guests.

One of these was for his 30th birthday with the even reportedly setting Tyson back up to £320,000.

Tyson liked to treat those around him too, spending £1.75m on a solid gold bathtub for former wife Robin Givens.

Then there was the jewellery with Tyson being a proud owner of a stunning £635,000 Piaget watch.

And, of course, Tyson needed a house or three to keep his belongings. He had a giant estate in Connecticut that he bought for £2.3m, which included 24 bathrooms and a swimming pool.

Tyson also had a mansion in Nevada, costing a cool £1.9m, and another expensive pad in Los Angeles.

Despite having been left bankrupt in 2003, Tyson has built his worth back up and is now believed to have a net worth of around £2.4m.

So it’s not all bad.