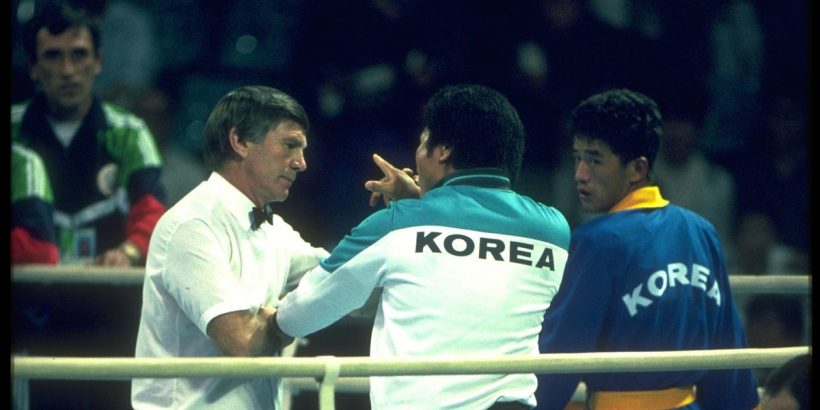 Yesterday’s Olympic boxing bout between Great Britain’s Frazer Clarke and France’s Mourad Aliev was perhaps the most controversial of the tournament.

In the quarter-final of the super heavyweight clash, after winning the first round, Aliev was disqualified in the second for excessive use of his head.

The decision sparked a stunning protest from the Frenchman, who sat in the ring for well over 30 minutes and claimed, “it was an act of sabotage” and an “injustice.”

While the protest was shared all over social media and condemned by fans across the world, when compared to incidents from past Olympic Games, it somewhat pales in comparison.

Perhaps the most famous Olympic boxing protest came during the 1988 Seoul Games, widely considered one of the lowest moments in Olympic boxing history.

During the clash, the home fighter was crucially docked two points by referee Keith Walker, after using his head illegally. He subsequently lost the gruelling, back-and-forth bout via 4:1 decision.

After the decision was announced, madness ensued.

How many gold medals do you think Team GB will end up with at the Tokyo 2020 Olympic Games? Let us know in the comments section below.

While a handful of other referees attempted to drag Walker away and protect him, a number of other men soon climbed into the ring and started to punch, kick and throw things at the referee.

The Korean coaches also attempted to attack members of the Bulgarian staff, and even some of the events security staff looked to violently protest the decision, with one going as far as to kick the referee in the head.

Once the mayhem had ended, Byun was the last man left in the ring and began a record-breaking sit-in of 67 minutes. Initially, the bantamweight sat in the ring but soon moved to a chair provided by his coaching staff.

Reportedly, two bouts were postponed thanks to the 19-year-old South Korean’s protest, but he later cleared the ring to allow proceedings to continue.

While Byun’s amateur career ended there, he would go on to enjoy a successful 12-fight professional career which saw him capture the WBC bantamweight title.

In contrast, Khristov would go on to win silver at the Seoul Games and competed at the 1996 Atalanta Olympics, but was defeated in the opening round.