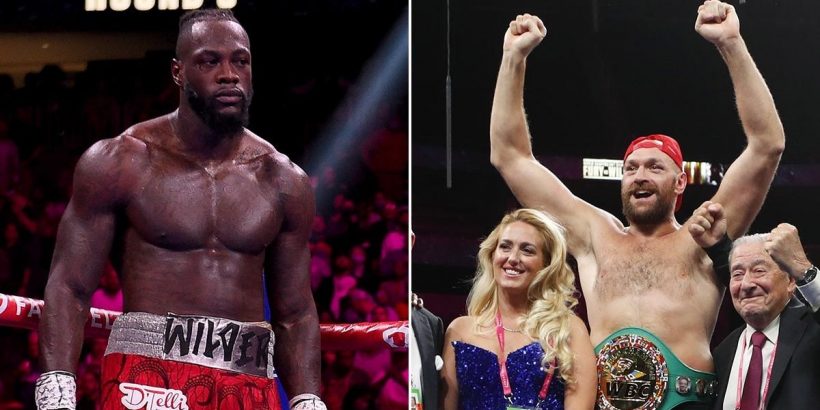 Tyson Fury's wife, Paris, has dished out some harsh advice to Deontay Wilder after he was beaten by her husband for the second time.

A thrilling trilogy fight between the two concluded in the 11th round as Fury floored the American for the third time, retaining the WBC heavyweight title he took off Wilder back in February 2020.

Unlike that occasion however, the Gypsy King was far from dominant, having to recover from twice being knocked down himself in the fourth round, with the judges' scorecards later showing he was behind at the midway point of the 12-round fight.

Fury, 33, did not enjoy the same volume of crowd support in Las Vegas as he did for his two previous fights with the Bronze Bomber, with international travel restrictions preventing British fans from flying over.

Wife Paris, who recently gave birth to the couple's baby daughter Athena, their sixth child together, was at the T-Mobile Arena though to cheer her partner on.

And afterwards, she didn't hold back when speaking to iFL TV about the beaten American.

"Clearly he (Wilder) is a tough man, but he’s not tough enough,’" she said.

The first bout of the trilogy, back in December 2018, ended in a controversial draw, with (Tyson) Fury claiming last week that Wilder knows "in his soul" he lost that fight.

"Maybe he (Wilder) will shut up now, go home and go to bed. I’ll be polite but we don’t want to hear that man’s name again.

The hype surrounding the fight became frenzied after an ill-tempered build-up, which saw the two boxers become embroiled in a heated altercation during the weigh-ins.

And afterwards Wilder, 35, was in no mood for reconciliation as he rejected Fury's attempt at a respectful embrace.

In his post-fight press conference, the British fighter dubbed his rival an 'idiot' for his apparent lack of grace.

"He's not the first one and he won't be the last one. But I've acted like a gentleman throughout my career and that's all I can do as a man."