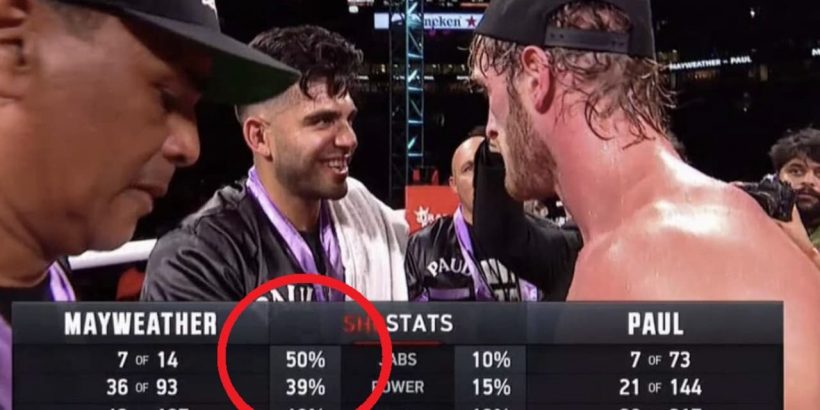 Well that was … different.

We’re not sure what everyone who tuned into Floyd Mayweather’s fight against Logan Paul was expecting, but things pretty much went to plan as the boxing legend had no troubles against the 26-year-old YouTube star.

The fight ended on an underwhelming note. There was no knockout and because the exhibition bout took place without judges, no winner was crowned.

Paul flew out of the gates early, throwing wild haymakers that barely landed.

Mayweather began to take control as Paul slowly gassed out, with the 44-year-old skipping around the ring and avoiding copping any major damage, apart from the occasional Paul hook that landed.

Proof fight was an absolute fizzer

When it comes to the official numbers, they certainly don’t paint a pretty picture — for anyone.

As for “Money” Mayweather, he threw significantly less punches but with more accuracy. He’s never been the most active fighter in the spot, preferring to dance his way around opponents rather than bulldoze his way through them, and it was more of the same against the YouTube sensation.

They were hardly inspiring numbers.

Fans had to cough up their hard-earned cash for the pay-per-view, but plenty are wishing they didn’t throw their money down the drain.

Plenty of punters were questioning what they’d sat through as the fight sank to some seriously sad levels.

I fell asleep during the #MayweatherPaul fight… woke up, and discovered that I didn’t miss anything. 😴

Everyone wants their money back 🙃 #MayweatherPaul

It saddens me what has happened to boxing.

To anybody who paid for this PPV, I’m sorry. #MayweatherPaul

The 50-0 boxing star praised Paul, but also reminded boxing fans he isn’t the spring chicken he used to be.

“But it’s good, to move around with these young guys, test my skills, just to have some fun.

“Great young fighter, strong, tough, he’s better than I thought he was.

“I was surprised by him tonight. Oh yes, I had fun.”

When quizzed about his future, Mayweather remained coy.

“We don’t know what the future holds, but I’ll talk it over with my team and see where we go from here,” Mayweather said.

Mayweather connects with a right hook.Source:AFP

YouTube star Paul was visibly proud of himself after the fight.

“The fact that I’m in here, with one of the greatest boxers of all time, proves that the odds can be beaten,” Paul said.

“I’m the maverick … I’m the unorthodox one, I’m the independent one, and everyone has it in them.

“S*** man, I don’t want anyone to tell me anything is impossible ever again.

“It’s an honour to grace the ring with him. This is the coolest thing ever. He’s tough to hit!”

When pressed on what happens next, Paul was unsure, but did make one suggestion that will have fans rolling their eyes: “Floyd Mayweather-Logan Paul 2?”

Paul miraculously went the distance with the boxing legend.Source:Getty Images