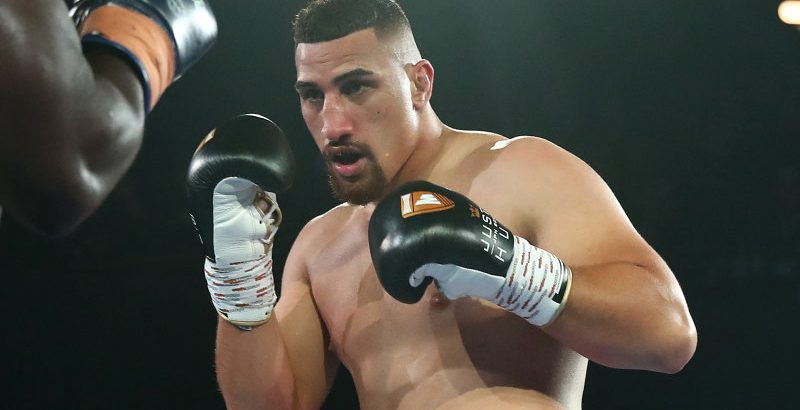 Olympic super heavyweight boxing prospect Justis Huni has dismissed any lingering concerns about the fragility of his chin as he prepares to return to the ring for the first time since being felled by a sparring partner in January.

Huni, an athletic 22-year-old from Logan who shapes as a genuine medal contender in Tokyo on the back of his bronze at the World Championships in 2019, will have his third professional fight when he lines up against the towering 2-0 Jack Maris on the Gold Coast on Saturday. 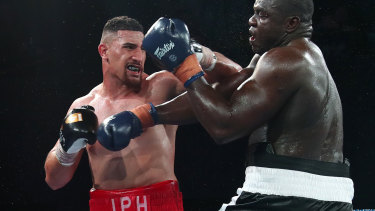 Justis Huni connected with Arsene Fosso as he defended his Australian heavyweight title in December.Credit:Getty Images

Olympic fighters can have a limited number of professional bouts and still compete at the Games and Huni’s team has handpicked Maris for his height, which they hope will help when Huni next crosses paths with the 201cm Uzbek Bakhodir Jalolov, the current world champion and gold medal favourite.

Huni burst onto the scene with a pair of impressive wins in his opening pro fights, showing terrific footwork and speed for the division. He’s not the biggest heavyweight in the business but his superior athleticism and sharp hands saw him win the Australian heavyweight crown in his first professional outing.

But things very nearly came undone in January when he hit his head on the ground after a friendly wrestle with friends, then was sent to the canvas when he was clipped by a cruiserweight in sparring. He withdrew from a boxing event in Townsville before resting and being given the green light to return to the ring.

Huni said he had no concerns heading into the six-rounder against Maris, a bartender from Newcastle who also makes a dollar assembling boxing rings, and felt rejuvenated from the impromptu break in training.

“None at all. That was the point of taking time off, so I could get everything right again,” Huni said. “If you get a concussion and you don’t rest and go back into sparring, it gets easier and easier [to be hurt] every time.

“But I had a good rest, everything will be sweet. I’ve been sparring big boys and I’m able to take what punches they throw at me. I’m not thinking about it.”

Huni is straddling both the professional and amateur worlds at the moment and hopes a rare Olympic boxing medal for Australia would fast-track his post-Games career in the ring. He hopes to fight twice more before Tokyo, one of which is planned to be the winner of the Lucas Browne-Paul Gallen clash on April 21.

But he wants to make sure his ringcraft is good enough to beat the daunting figure of Jalolov should he stand in the way of a medal in Tokyo.

“I had a loss against him in early 2020 at the Olympic qualifiers. That’s all I’ve been training for… when the Olympics were postponed, we worked on fighting taller opponents,” Huni said. “I’ll be ready for sure and I know how to fight these taller guys. I knew how to fight Jalalov but I just didn’t commit to it on the day. It’s a lot different fighting in the amateurs, you have to be able to adjust, every day you fight someone knew.

“Everyone has a different style, you might have someone sitting on your chest, you might have a taller opponent. I didn’t adapt on the day but this is what I’ve been training for the past eight weeks.”