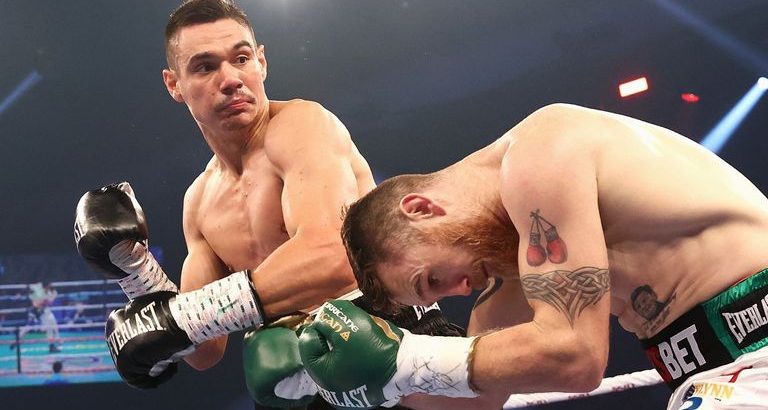 Tim Tszyu produced another clinical performance to dispatch Dennis Hogan in five rounds and deliver a reminder of his emerging potential.

The son of boxing legend Kostya Tszyu retained the WBO global super-welterweight title in Australia on Wednesday and improved his perfect record to 18-0.

His latest impressive win comes four days after Campbell Hatton’s pro debut – their fathers collided in a classic fight in Manchester in 2005 which Ricky Hatton won, his finest ever night.

Australia-born Tszyu has now won three times via stoppage since boxing’s comeback last summer and is a viable threat to the world titles.

Tszyu was forced to overcome a cut from an accidental head clash against Hogan but he controlled the fight.

A left hook hurt Hogan in the fourth round after constant body punches. Tszyu knocked Hogan down in the fifth and, as he moved in to finish the job, the towel was thrown in.

Tszyu is ranked as the WBO’s No 1 contender to the world title held by Brian Castano. Britain’s Liam Smith is No 2.

Conor Benn, another son of a legend who grew up in Australia, puts his unbeaten record on the line against Samuel Vargas on April 10, live on Sky Sports.